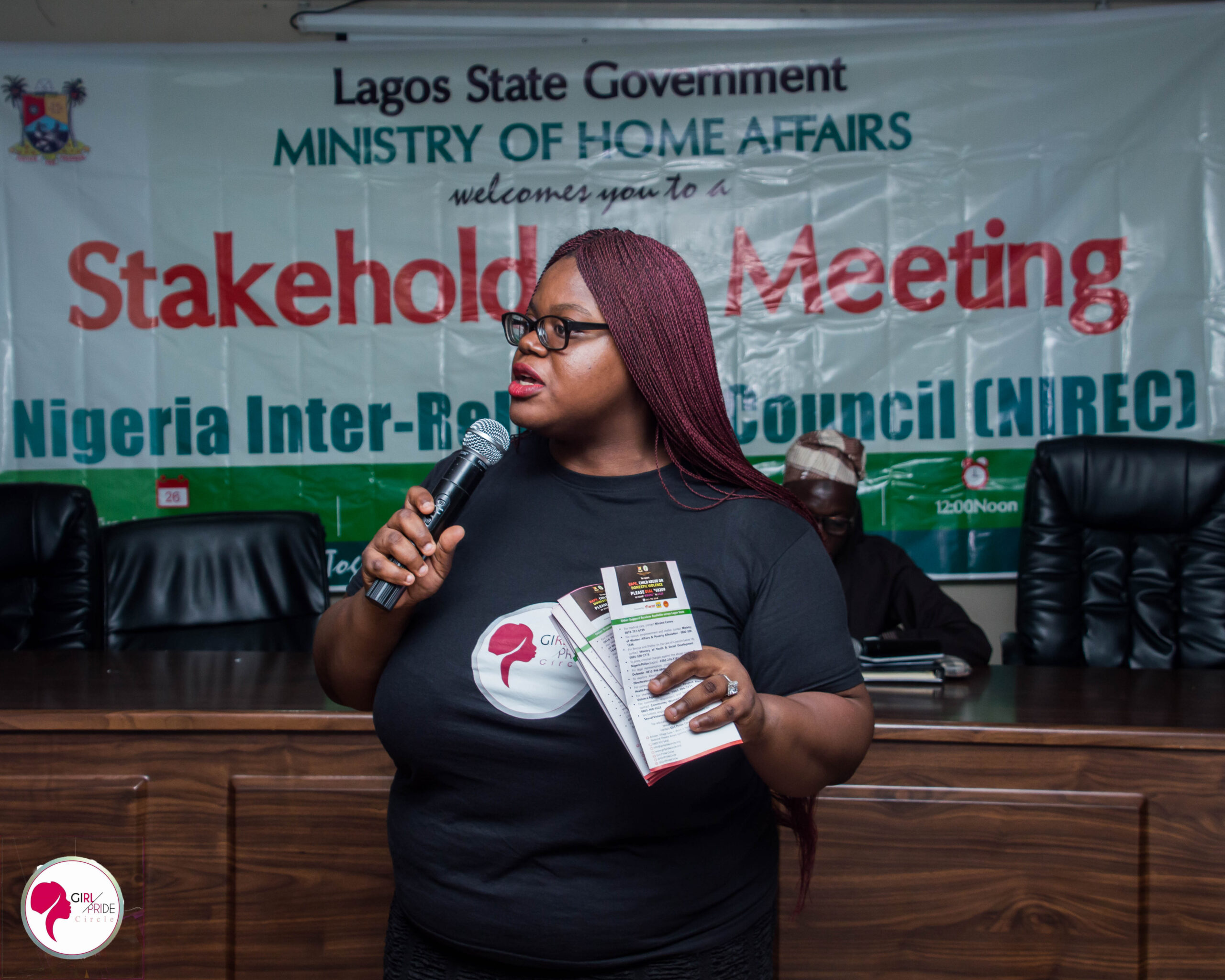 Following her Commonwealth Shared Scholarship in 2019 and as part of her work at GPC, Olaoluwa co-led the design, resource mobilisation, and implementation of the project ‘Zero Tolerance to Sexual Violence in Religious Communities’. The project aimed to support religious leaders in Lagos State, Nigeria to embrace the critical role that they play in the implementation of the National Gender Policy and the eradication of sexual violence.

Religious leaders play an important role in educating members of their communities on both religious and non-religious matters. In 2017, an Afrobarometer survey on religion found that 56% of Nigerian respondents identified as Christian and 42% as Muslim. With such significant reach in Nigerian society, religious leaders are well positioned to raise awareness and act as spokespeople and ambassadors on important issues, such as sexual violence.

“[R]eligious communities are those who are regularly in touch with people… they have that direct contact with the people that even the local government doesn’t.”

Recruiting a network of interfaith ambassadors

Engaging religious communities on the topic of sexual violence is not straightforward, and globally different approaches have been used to create spaces for open discussion and learning. To reach Christian and Muslim religious leaders in Lagos State, Olaoluwa and her team utilised existing GPC networks. This included approaching the Lagos State Domestic and Sexual Violence Agency (DSVA) who were already working with religious leaders on eradicating sexual violence. Through a sister NGO, they also established contact with the interfaith group, Nigeria Inter-Religious Council (NIREC). NIREC brings together Nigerian Christian and Muslim leaders and provides a forum for interaction and understanding between religions and promotes religious harmony.

By approaching religious leaders through these networks, GPC became a trusted organisation with which religious leaders were willing to engage in discussions on how best to introduce information on sexual violence within their communities. They also helped connect GPC with other religious groups. Through these contacts, GPC recruited a network of ambassadors to support the project and raise awareness of sexual violence. 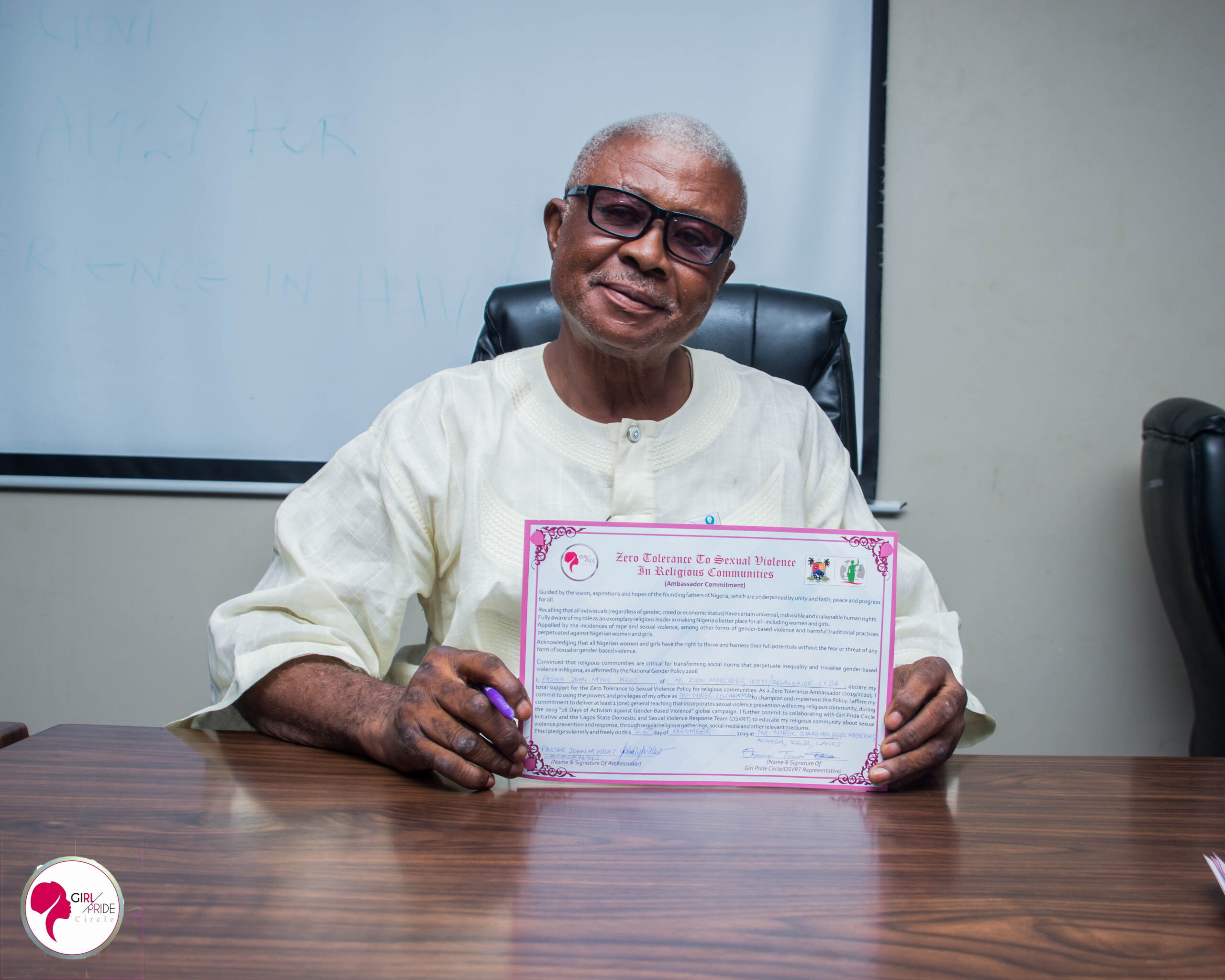 To help leaders disseminate information on sexual violence, Olaoluwa and her team developed materials providing basic information on what constitutes sexual and gender-based violence, the mechanisms to report cases, and how victims can access support services. This included sharing the contact details of local police, NGOs, and shelters.

As well as the creation of information materials, Olaoluwa and her team facilitated workshops to raise awareness and encourage open discussion. Thanks to GPC’s network of interfaith organisations, the workshops fostered conversations between different faith leaders on how they had or potentially could raise awareness of sexual violence and share ideas and experiences to unify and strengthen their approach. This included identifying ways to communicate information through existing channels, such as sermons and seminars, as well as religious events and activities.

During discussions with religious leaders, the GPC team became aware of false information which had influenced their willingness to previously engage in conversations on sexual violence. This included the belief that reporting an allegation of sexual violence would automatically result in the imprisonment of the accused. This enabled the team to clarify the justice process around reporting sexual violence and promote a survivor-centred approach. 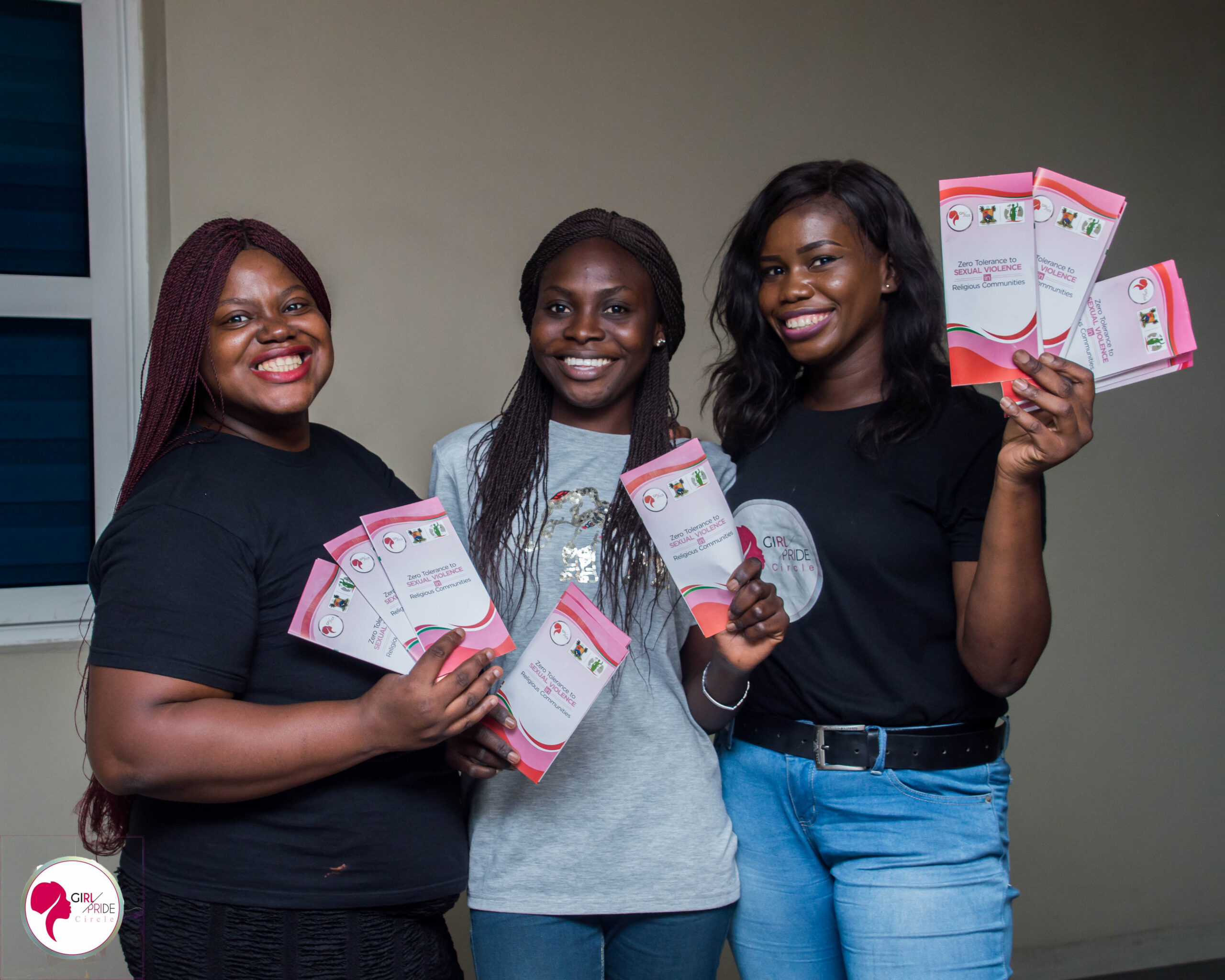 Securing the support of religious leaders

Olaoluwa has been overwhelmed by the ways in which religious leaders subsequently chose to raise awareness of sexual violence. In one case, a senior religious leader and Superior Evangelist for the Celestial Church of Christ, one of the largest Christian denominations in Nigeria, organised an inaugural lecture on the topic during the 16 Days of Activism Against Gender-Based Violence. During his lecture, which reached a congregation of approximately 300 people, he drew on passages from the Bible that speak against sexual violence to help underline the messages provided by GPC.

Another example included a representative for the Redeemed Christian Church of God promoting her role as a Zero Tolerance to Sexual Violence Ambassador on their TV channel and sharing information on the topic to millions of viewers. 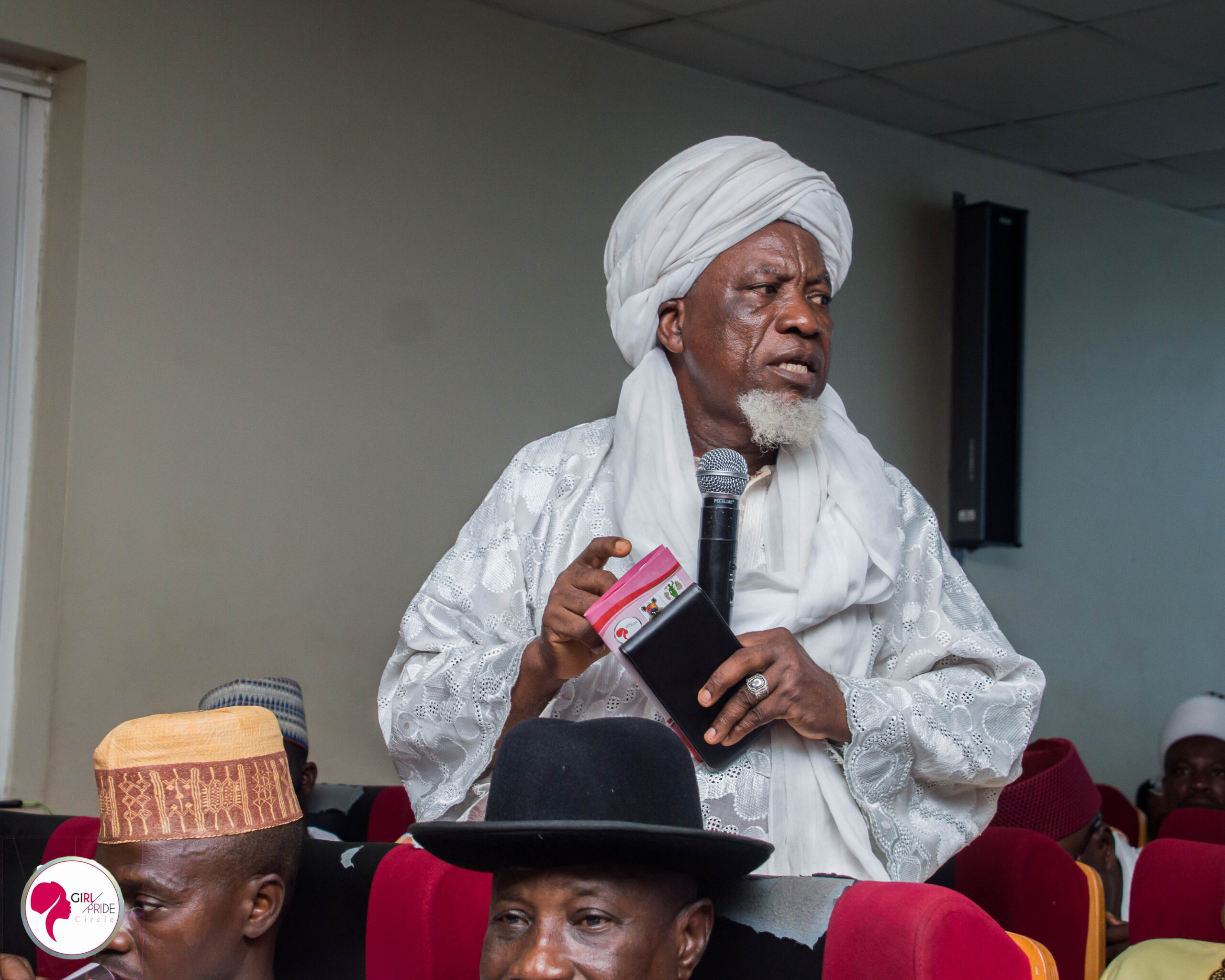 Reflecting on these significant actions, Olaoluwa is proud of the work GPC have achieved through the project and the willingness of religious leaders to work together and within their communities.

“They were not doing this work before we engaged them. They were not. So, they probably knew about sexual violence but didn’t feel equipped to talk about it within their communities. But just being able to be that bridge between the information they got, and see how they, now, passed it on to their communities was just phenomenal.”

As well as introducing direct discussions on sexual violence, it was also important that Olaoluwa and her team were aware of and contributed to the other ways in which religious leaders were already tackling instances of sexual violence. Through the interfaith group, Public Health Advocacy Group for Religious Leaders GPC contributed to discussions on family planning and how sexual and gender-based violence can occur in this context.

Reflecting on the project, the ambassador network GPC has created and how it has disseminated information, Olaoluwa feels they have made significant progress in engaging religious leaders and communities on the topic and that they have laid the foundation for future engagement.

“[I]t’s really hard to engage communities around issues like sexual violence… getting them to come to the table to talk about sexual violence, to be open to accepting the policies, and to be open to say this thing happens. To own up to it and not choose silence. It was really hard to get them to the point. And we only scratched the surface, there’s still much to be done. There’s a lot more to be done when it comes to engaging religious communities. But that first step of providing that policy, we recruited around 120 religious leaders through that project.” 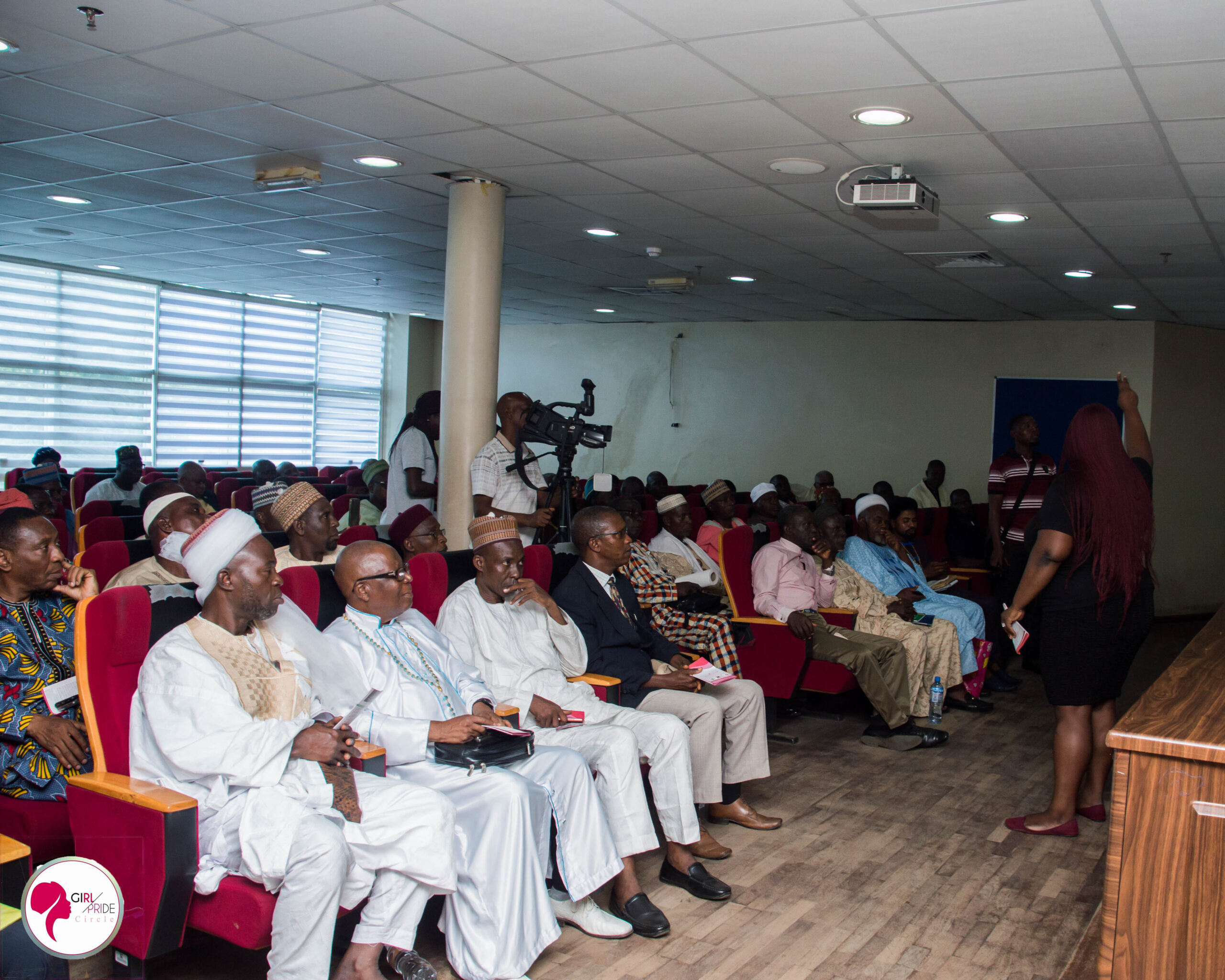 Having started the ‘Zero Tolerance to Sexual Violence in Religious Communities’ project after completing her Commonwealth Shared Scholarship, Olaoluwa says that her time in the UK studying at the Institute for Development Studies (IDS) at the University of Sussex played a key role in shaping the gender expert she is today.

“[B]efore I went to the IDS I wouldn’t say that I considered something like intersectionality, recognising that when you’re talking about gender equality, there’s several layers of inequalities… And learning how to work from that perspective, and the principle of participation, as well, understanding that you leading a particular work does not mean that it’s only your perspective that should lead.

Really, it was IDS that gave me all of this grounding. Before that, I was just a lawyer who was passionate about gender equality. But I would say that IDS really shaped my thinking into becoming a gender expert.”

In March 2022, Olaoluwa was appointed the Executive Director of the ATHENA Network, a global network of individuals and organisations committed to ensuring that gender equality and human rights are at the forefront of the global HIV and AIDS response. Founded in 2006, the network seeks to ensure that the voices and experiences of women and girls are reflected in HIV and AIDS advocacy, programmes, and policies.

In 2021, the ATHENA Network moved from the United States to Sub-Saharan Africa and is now based in Namibia, with Olaoluwa’s team situated across the continent. She feels this was an important strategic decision for the network to re-centre itself and focus its work on countries where women and girls are most affected by HIV and AIDS.

“We know that women and girls are more at risk of HIV and AIDS, especially in Sub-Saharan Africa. The data does not lie, it tells us that. So, we know that in the HIV response, we have to integrate other issues that affect women and girls. Because we see that the level of education that girls and women get, the level of knowledge around sexual and reproductive health, even economic empowerment, is important when it comes to preventing them [from] contracting HIV.”

As the newly appointed Executive Director, Olaoluwa is drawing on her experience as the founder of GPC and other consultancy roles she has held. Over the last four years, she has actively worked on programmes related to gender transformative education and gender-based violence in West and Central Africa. She hopes to bring her knowledge, experience, and relationships in these areas to strengthen the ATHENA network.

“[B]ringing that lens of someone who has worked actively around gender-transformative education, and around gender-based violence to strengthen the work that ATHENA continues to do around gender equality and HIV response is something that is really critical that I would say I’m bringing that to the team.”

Olaoluwa Abagun is 2018 Commonwealth Shared Scholar from Nigeria. She completed an MA in Gender and Development at the University of Sussex.