The CSC Regional Networks add to the Commonwealth Scholar experience through a range of social and other events. This year, our Regional Network Coordinators came together with Chevening Scholars (another UK government-funded scholarship programme) to organise a unique sporting event. Duncan Kwaitana (2016 Commonwealth Shared Scholar from Malawi, MSc Clinical Leadership in Cancer, Palliative and End of Life Care, University of Southampton) reports.

It was a cool Saturday afternoon in June, befitting a game of football. The Armitage Sports Centre at the University of Manchester was the venue for the showdown. A sizable crowd from both sides came to witness the event: the first-ever Commonwealth v Chevening Scholars football match.

Before the match, both teams lined up for pictures, as is the tradition in the game of football – the Commonwealth team in navy blue bibs, the Chevening team in all white bibs. The match then kicked off.

The Commonwealth team started on a positive note, exchanging passes from one player to another. The team was a beauty to watch, and their flowery football and dominance at the start paid off in the seventh minute. The move was orchestrated from the middle of the park, which was well marshalled by Simon Manda (2014 Commonwealth Scholar from Zambia, PhD International Land Deals and Livelihood Changes, University of Leeds) and company. The ball was lifted into the 18-yard box for Forkan Sarker (2015 Commonwealth Scholar from Bangladesh, PhD Textile Science and Technology, University of Manchester) to provide the opener, sending the Chevening goalie the wrong way. 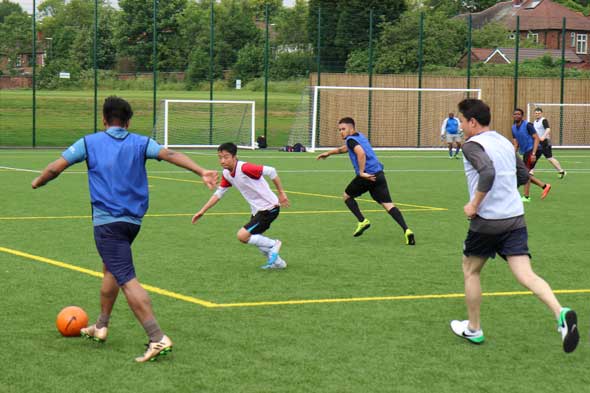 Sensing danger, the Chevening team woke up from their slumber and started pressing for a reply. Their insistence caused panic at the back of the Commonwealth team. This resulted in an own goal by Rich Chidi Nwagwu (2016 Commonwealth Scholar from Nigeria, MA Terrorism, International Crime and Global Security, Coventry University), who beat his own goalkeeper as he was trying to clear off the line. At half time, Chevening were trailing by 3 goals to 1.

The Chevening team was a changed side after the break, making a couple of substitutions that changed the complexion of the game. Midway through the second half, they were awarded a penalty when one of their strikers was tripped from behind. The referee did not hesitate but immediately pointed at the dreaded spot. Robert Arthur was charged with the responsibility of facing the Commonwealth goalkeeper. His first attempt was parried before he came forward on a rebound to hit the roof of the net, making the score 3-2.

Chevening was indeed a comeback team. Robert was at it again when their arsenal tore apart the Commonwealth defence, leaving him unmarked before he coolly beat the advancing goalkeeper. There was high jubilation among Chevening supporters, whose celebrations silenced the once vocal Commonwealth fans.

The game was almost heading for spot kicks to decide the winner when, in the dying minutes, the Commonwealth team regained their rhythm. A volley from the right wing found Christian Appiah-Num (2016 Commonwealth Shared Scholar from Ghana, MSc Sustainable Agriculture and Food Security, Royal Agricultural University) in the box. He jumped, defying gravity like a fighter jet taking off, before unleashing a rocket with his left foot into the back of the net – sending Commonwealth supporters into a cacophonous frenzy of euphoria and bliss marked by ululations and chanting.

The most painful goals are always scored in the dying minutes of the match. The Chevening defence had gone to sleep, thinking the game was over. Remember: the game is never over, until it’s over! The match ended 4-3 in favour of Commonwealth Scholars. 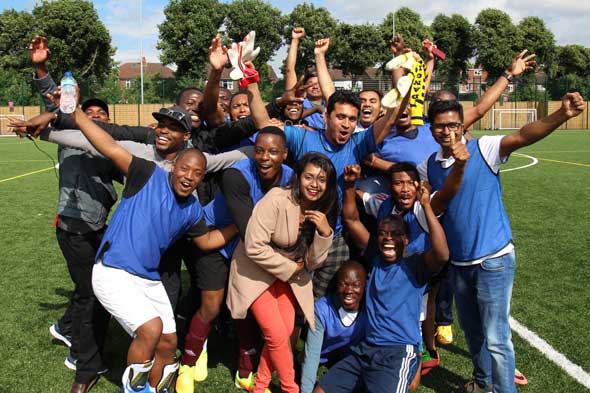 Our thanks are due to the University of Manchester for hosting the match; the CSC and Chevening Secretariats for their support; and, most of all, to the CSC Regional Network Coordinators and Chevening volunteers who put so much hard work into organising the event and ensuring it was a success.