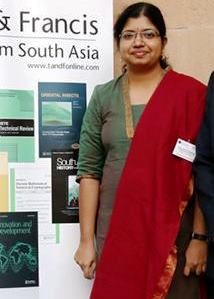 Dr Sandhya Sukumaran, joint winner of the 2014 Taylor & Francis Commonwealth Scholar Best Journal Article Prize, was presented with her award at the recent launch of the Indian Association of Commonwealth Scholars and Fellows (ACSF) on 19th December in Delhi.

Sandhya (2008 Commonwealth Scholar from India, PhD Aquatic Eco-genotoxicology, University of East Anglia) was one of two joint winners of the 2014 prize for her article ‘Multigenerational demographic responses of sexual and asexual Artemia to chronic genotoxicity by a reference mutagen’. The other winner, Dr Ben Irving (2008 Commonwealth Scholar from South Africa, PhD Biomedical Engineering and Medical Image Analysis, University College London) was presented his award at the Farewell Event 2015 for departing Commonwealth Scholars and Fellows. Sandhya intends to use part of her cash prize to support a high achieving student from an economically disadvantaged background access higher education.

Applications for the 2016 Taylor & Francis Commonwealth Scholar Best Journal Article Prize are now open. Any Commonwealth Scholar currently studying for their PhD or who has completed their PhD within five years prior to the competition opening (i.e. submitted your these from January 2011 onwards) is eligible to apply and should have received an invitation to enter. The prize comprises a cash prize of £1,500 and a year’s personal subscription to a Taylor & Francis journal of the winner’s choice.