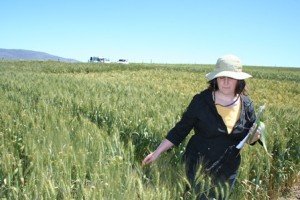 Ida   is currently Head of Crop Protection and Field Crop Research and Development at ExperiCo Agri-Research Solutions in South Africa, a post that she took up last year. She has previously worked for the Agricultural Research Council in South Africa as a plant pathologist.

At ExperiCo Agri-Research Solutions Ida conducts and manages several diverse agricultural research projects. The work of Ida and her team has led to research that has contributed to the improved management of a number of field and tree crop diseases, which has had a positive impact on sustainable food production. One area of research has centred on rust diseases in wheat, which can reduce the yield of what, which is a staple crop.

The timing and the number of fungicide sprays plays a very important role in how successful the spray applications will be in controlling the rust diseases (and at the same time protecting the yields). Ida’s research results clarified the exact use of these chemicals on wheat in South Africa. In some instances, where fewer chemical applications could be used, it saves costs for the farmers, and protects the environment from exposure to these chemicals, which are toxic to some animals like fish, and also soil microbes.

In many countries the farmers rely on the resistance of their wheat cultivars for control of diseases. In South Africa, there is not such full reliance on host resistance (the plant is immune to the disease), so the application of fungicides are generally more important than in other parts of the world. With the emergence of new types of rust which overcome host resistance (such as Ug99 which has received a lot of media attention around the globe), fungicidal control of the rust diseases remain important for our wheat industry.

Similar work has been carried out on barley, and outcomes are also relevant to the minor crops of oats and triticale in South Africa.

Recently, Ida’s work has focussed on the optimisation of application methodologies of crop protection agrochemicals. This entails the precision application of chemicals. Using exact amounts and placing it in exact ways, so that researchers are effectively controlling the fungus that causes the disease. This research is still in the first phases, and the outcomes are theoretical, but some similar results in literature on the topic encourage such exploration – so this could have great potential.

Currently, Ida is also undertaking work on developing biological control agents, as well as soft chemical products for the apple, pear, apricot, plum, peach and nectarine industries in South Africa – but this is separate from the other activities. This programme is in the first  year, and is meant to be conducted for another five or six years, so it will be some time before viable options become available within these industries.

The time Ida spent in the UK as a Commonwealth Split-site Scholar contributed to her growth in a personal and a professional capacity. ‘Being in a foreign country and culture for a period of time gave me a better understanding of the world in general. I returned with a level of confidence in my work, which I would never have had if I did not receive the training I did. I knew I could do research and do it well – and I felt equipped.’

As the demand for food for a growing world population increases, the role of agricultural research to support sustainable agricultural production becomes increasingly important.

However, skills and knowledge for a continued high level of excellent agricultural research, especially in Africa, is scarce. The professional training in world-class scientific laboratories Ida received during her scholarship enhanced her scientific, leadership and team management skills.   As well as a continued focus on delivering research results, Ida intends to grow and expand her research division, to generate and deliver much-needed new knowledge to support agricultural production.