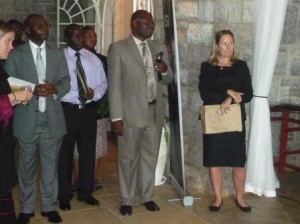 Since it was founded in 2011, the CSC Kenya alumni chapter has held regular Annual General Meetings and also participated in social events and stakeholder activities. This includes the ‘Me and my Net’ malaria-awareness raising campaign from the Royal Commonwealth Society and meeting British MPs from the House of Commons Foreign Affairs Select Committee (May 2012).  Members have also attended events such as pre-departure briefings for Chevening and Commonwealth Scholarships Scholars (31 August2012).

The chapter’s 3rd Annual General Meeting will take place at 5pm on Thursday 16 May at the British Council office in Nairobi. All current and former Commonwealth Scholars and Fellows from Kenya are welcome to attend, but must register for the event by emailing the chapter co-ordinator at: csc.alumni.kenyachapter@gmail.com

The Kenya chapter welcomes members who are alumni as well as current scholars such as locally-based Distance Learning Scholars. Scholars and fellows can find out more about the chapter by emailing the co-ordinator, Dr Maurice Okoth, and by visiting the chapter Facebook page.

UKCAC- Mauritius held its 9th Annual General Meeting on Friday 5 April 2013 at Dragon Vert Restaurant, followed by the Annual Dinner. The President, Dr Souda Rosunee  presented his report about events held last year, including the participation of alumni during the 18th Conference of Commonwealth Education Ministers, a workshop on gender issues  and the alumni reception.

The UKCAC-Mauritius Chapter will keep the same Executive Committee for 2013/14 as per rules of the chapter and updates of events including photos taken during alumni reception in August 2012 can be  found on the chapter website.