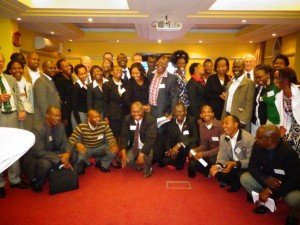 Have you fulfilled your promise?

Kenyan alumni and distance learning scholars were asked this question at the beginning of a reception held at the Fairview Hotel, Nairobi on 19 September. Commonwealth Scholarship Commissioner Richard Middleton wanted those present to think back to the statements that they had made on their application forms to evaluate if they were using skills and knowledge gained from scholarship[s and fellowships to contribute to the development of their home county.

With the theme of the reception being ‘the Pulse of the Association’, some alumni took the opportunity to tell their stories through exhibition tables, which showcased their workplace and business activities. Dr Lydia Nzoka (2011 Commonwealth Distance Learning Scholar, MSc Veterinary Epidemiology & Public Health, Royal Veterinary College), displayed craft items and baby clothes from her own business ‘Warm Collections’. The business started through her passion for art and combining it with hand-crafted work from local communities. The business had grown from just an idea to a full- blown income-generating activity. She utilises women from Kitui County, which is classified as an area of minimal economic activity to produce hand-made items, providing local women with an income. 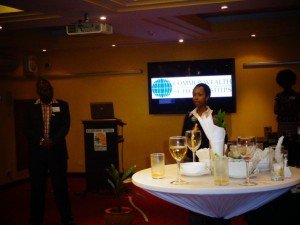 George Onyango (2010 Commonwealth Professional Fellow, International HIV/AIDS Alliance) explained that that since returning to Kenya  he had started an organisation called Dandora Dumpsite Rehabilitation Group (DADREG), which deals with street families by enabling them to  improve their wellbeing and think of alternatives to sorting garbage for recycling as a way of earning a living. George reported that he had been able to devise projects that improve the skills of young people as a direct result of skills gained during his fellowship.

There was also time for a more light-hearted “Pulse of the Association” presentation given by Dr Maurice Okoth, President of the Kenyan alumni association.  He looked back at the original idea behind the association, highlighting achievements over the three years since it’s formation. The CSC, the British High Commission and the British Council were all thanked for their role in the formation of the chapter.

The alumni presentations were followed by remarks from Mr Tony Reilly, Country Director of the British Council. Tony’s speech was followed by closing remarks from Executive Secretary of the Commission, Dr John Kirkland. Afterwards there was a lively and productive networking session, which also included guests from DFID, the British High Commission, and the Kenyan Ministry of Education, the Royal Commonwealth Society, and the British Council. It was a successful event and one from which the guests made new friendships and connections across a range of organisation.