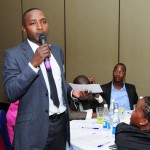 Alumni met in Kampala, at the Sheraton Hotel, on 3 December 2013 to discuss how they could follow other regional alumni in setting up a local alumni association. The event began with a focus group discussion moderated by Marianne Kiggundu, CSFP Regional Manager, British Council, to explore the type of networking group the alumni could form.

Alumni decided in favour of a formal association structure, with activities such as facilitating the exchange of expertise, and networking opportunities for alumni. The alumni were also keen to provide mentoring for new Commonwealth Scholars and Fellows and to use their group as a platform through which to foster service to the wider community. 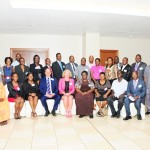 The reception that followed brought together guests including representatives from the Ministry of Education and Sports, the Ugandan nominating agency, the British Council and the British High Commissioner to Uganda, HE Alison Blackburne. Alison encouraged the alumni in their aims, and was pleased at the success of their meeting and the planned outcome. She promised to draw on the day’s discussions to support the growth of the alumni network in the future.