Lindsay Barnes, a UK citizen, was awarded a Commonwealth Scholarship in 1985 to complete her PhD in Sociology at Jawaharlal Nehru University, in India.

During the course of her PhD fieldwork, Lindsay came into contact with ‘appalling living conditions in the coalmines, grinding poverty in the surrounding villages and women whose survival seemed a miracle of sorts’. Instead of returning to the UK upon completing her PhD in 1990, Lindsay remained in the nearby villages, trying to improve the lives of poor rural women.

The village where I live and work is in the state of Jharkhand, one of the poorest in India. The local area has over 100 villages and a population of nearly 200,000, but no resident doctors. There is a primary health centre with doctors available only during the day. There is no government hospital in the whole district – with a population of nearly 2 million – which provides free or low-cost emergency obstetric care for poor women. 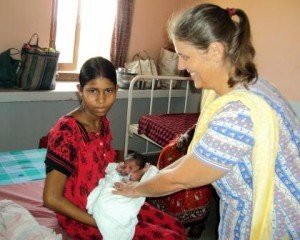 Lindsay’s involvement with childbirth in the villages started in 1994, and she had no real experience other than having two children herself. When a group of villagers came in the middle of the night to help a woman in childbirth, she realised how desperate they were for help, and began her involvement in local healthcare activities.

Lindsay and her husband set up Jan Chetna Manch (‘organisation for people’s awareness’), and started yearly health fairs, monthly camps, and then weekly clinics. Now clinics are open three days a week, providing services to around 600 women each month, mainly for antenatal care.

Fifteen years ago, antenatal checks were rare, but the clinics have provided check-ups to over 7,000 women in the last five years, and there has been only one maternal death. The health centre is open 24/7 for women in childbirth, and over 50 women deliver at the centre each month.

It is not possible for the poor to pay for quality healthcare, and I firmly believe that the poor should get the best! We do charge for services, and we are not completely dependent on donors, but when emergencies happen – for the mother or her baby – the poor still have to sell their land for medical care. It is something that I find difficult to have to do.

Donations to help Lindsay’s vital medical work can be made by wire transfer: