Bringing science to the wider community 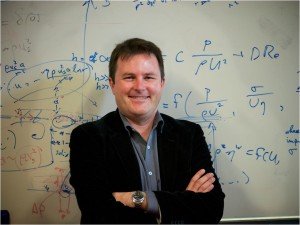 Professor Shaun Hendy (1995 Commonwealth Scholar from New Zealand to Canada, PhD in Physics, University of Alberta) combines his work as  a Professor of Physics with encouraging public engagement in science. In 2012 he won the New Zealand Prime Ministers Science Media Communication Prize for his work in communicating science to the public.

One of the projects that Shaun has financed with the prize money from the Prime Minister’s Science Media Communication Prize was a free, online game Pounamu, devised to increase public dialogue with science and scientists.

The game is set in a future world where everyone in New Zealand can use science as easily as they can use a compute. Anyone can play: from primary school students to research scientists.

Players post micro-forecasts (concise ideas in 140 characters, like Twitter) of future possibilities and build on, or reshape other players’ ideas. A player can play for five minutes and share one idea, or play for the whole game and post hundreds of possible futures. Points are gained by posting ideas that create more discussion, contributing interesting ideas to the game and winning awards.

Shaun also used his prize money to commission an art work fro a local artist, Gabby O’Connor, based on his study into innovation, and the complex geometric patterns in networks of people, companies and ideas he has found by using computers to examine millions of inventions.

Typically, Shaun combines a busy academic career with his public engagement activities. He is Professor of Physics at the University of Auckland, as well as President of the New Zealand Association of Scientists. His research interests include work on the physics of complex systems.

Shaun’s extensive science communication work includes writing a monthly column for a national business magazine and a regular radio slot on national public radio. His first popular book on science Get Off the Grass (Auckland University Press), about the importance of science to the New Zealand economy was published in August 2013,