The Commonwealth Scholarship Commission in the UK (CSC) and Taylor & Francis Group are delighted to announce Chigozie Utazi as the winner of the 2018 Taylor & Francis Commonwealth Scholar Best Journal Article Prize, for his article High resolution age-structured mapping of childhood vaccination coverage in low and middle income countries, published in Vaccine in 2018.

Sustainable Development Goal 3 supports the research and development of vaccines and medicines for the communicable and non-communicable diseases that primarily affect developing countries. 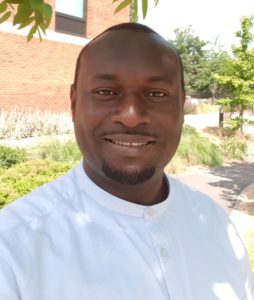 Chigozie is a 2010 Commonwealth Scholar from Nigeria. He studied for a PhD Statistics at the University of Manchester and Lancaster University. His article assesses the performance of improved access to childhood vaccination programmes in low- and middle-income countries. Indicators of vaccination programmes, including coverage levels and vaccination numbers, are typically measured through national or regional statistics, which mask epidemiologically relevant heterogeneities and coverage ‘coldspots’, that may lead to sustained disease prevalence, despite high overall coverage levels. Funded by the Gates Foundation, in conjunction with WHO and Global Alliance for Vaccines and Immunization, this work forms part of the evidence base to guide the design and implementation of vaccination programmes in high-burden countries.

Following the publication of his research, Chigozie and fellow researchers are continuing to scale up their work, applying the techniques presented in the article to mapping the coverage of childhood vaccinations in other low- and middle-income countries in Africa and Asia. The team are also developing an open web visualisation tool that will host country-specific output maps to increase the accessibility of the data gathered. It is hoped that the sharing of this data will support the work of other researchers and inform stakeholders and government policy makers.