Digging deeper: The quest to uncover and solve deforestation issues 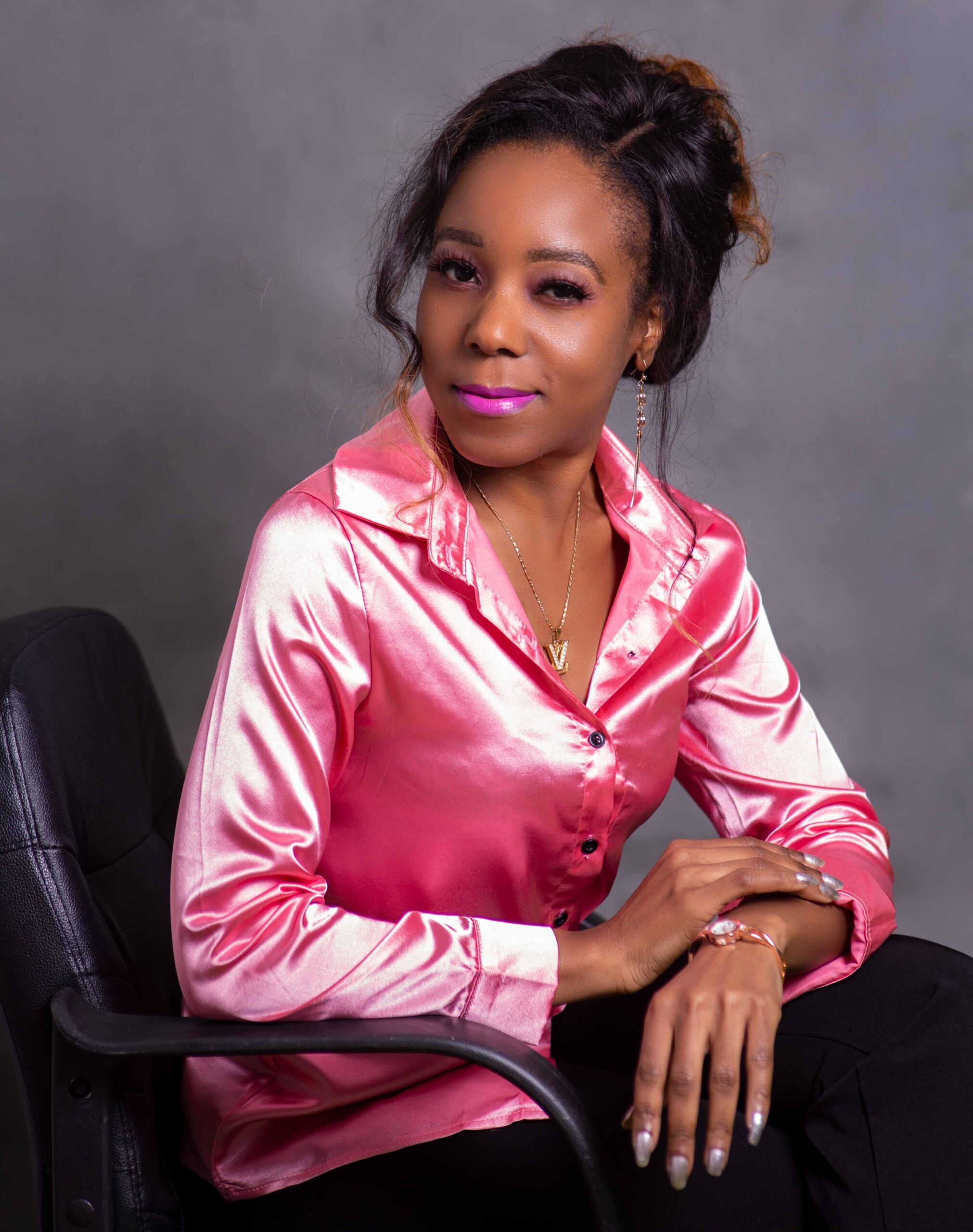 PhD in Climate Change and the Environment

Following field investigations in 2019, Josiane Gakou Kakeu sheds light on the successes and limitations of REDD+ pilot initiatives in Cameroon, which aim to reduce emissions from deforestation and forest degradation.

Deforestation and forest degradation are among the leading causes of climate change, as these actions are responsible for approximately 15% of global greenhouse gas emissions.

Addressing emissions from the forest sector has therefore become a priority for the international climate change stage. To mitigate forest emissions, the United Nations Framework Convention on Climate Change (UNFCCC) introduced a programme named REDD+ (Reducing Emissions from Deforestation and forest Degradation) in 2007. REDD+ aims to financially compensate forest-rich low-income countries which are willing to address the issue of forest clearing.

With over 22 million hectares of forests, Cameroon is home to one of the largest forest areas in the Congo Basin. However, the pressing need for poverty alleviation and economic recovery through agricultural expansion, logging, mining, and infrastructure development have put a strain on the country’s forests. The Cameroonian government joined the international REDD+ initiative in 2007 and has hosted various REDD+ pilot projects to curb forest cover loss, but in a context where global initiatives often poorly fit with local realities, I undertook to investigate the factors that may affect REDD+ implementation in Cameroon. I used three REDD+ pilots as case studies; these were selected to cover distinct ecological zones and a range of REDD+ activities, as well as diverse sociocultural settings. 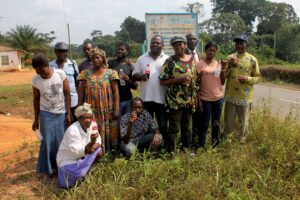 Photo showing some of the beneficiaries of a REDD+ pilot scheme

The first pilot had been deployed between 2009 to 2015 in the dense forest village of Nkolenyeng in Southern Cameroon, where households practice slash-and-burn agriculture, and harvest trees and non-timber products from the community forest. The forest emissions reduction project implemented in Nkolenyeng aimed to slow the clearing of the community forest. Led by the Center for Environment and Development, a local NGO, and funded by the UK Department for International Development (now known as the Foreign, Commonwealth & Development Office or FCDO), the project provided improved seedlings to local farmers to increase farm productivity and reduce farmland expansion into the forest.

The second project was implemented in Efoulan village in the same region, by the International Union for Nature Conservation with funding from the Danish International Development Agency; it ran from 2013 to 2017. Community members were trained in improved agricultural practices, such as how to clear the farm without burning and how to perform seed selection. They learned how to maintain a tree nursery and were taught tree regeneration techniques such as seeding, stem cutting, layering and grafting. They were further taught crop fertilisation and supplied with improved
crop seeds to enhance agricultural productivity and cease the slash-and-burn cultivation method.

The final pilot ran from 2015 to 2019 in the grassland region of West Cameroon, within the Bana-Bapouh forest reserve. Pastoralists in this area practice burning to stimulate grass growth for cattle, and the forest is also under pressure by unauthorised logging, overgrazing, farming, and expanding settlements. The REDD+ pilot aimed to halt forest clearing and support the restoration of the reserve, with funding from the French Agency for International Development and under the coordination of the National Participatory Development Program. As part of the project, farmers were provided with improved seeds to increase crops’ productivity. Livestock keepers were also taught how to cultivate grass for cattle.

To explore how the globally-led REDD+ initiative fits with local realities, I held focus group discussions with project beneficiaries in all three sites and conducted interviews with community leaders, council officials, forest companies, and officers from the forestry, agricultural, and husbandry sectors.

Investigations revealed knowledge discrepancies between project designers and local communities. A key goal of Cameroon’s REDD+ strategy and pilot projects is to eliminate smallholders’ shifting agriculture, which is considered a main driver of deforestation as plots of land are cleared and
cultivated temporarily, then abandoned for another plot while the soil recovers through fallow vegetation.

While participants from the less-forested West region recognised that smallholders’ livelihoods put pressure on the forest reserve by clearing the woods for new lodgings, for wood energy and from frequent bush fire by pastoralists, local communities in the dense forest sites claimed that
large scale agriculture and industrial logging clear larger forest areas. They further suggested that burning farms eases clearing, eliminates shadowing of crops and fertilises the land, and that yields are higher in newly converted forestland. Farmers also found tree nursery activities quite
complicated: while they adopted local tree species, they abandoned other species such as citrus plants which need frequent maintenance and treatment, and which they found laborious and costly.

This research further showed that forestry institutions have considerable impacts on the effectiveness of REDD+ activities, and that these originate from the rules regarding timber processing and reforestation. The 1994 Cameroonian Forestry Law sought to increase local timber processing
through tax incentives, restrict the export of unprocessed round logs, and compel logging companies to set up local wood processing facilities. Local wood processing supports livelihoods and eases pressure on forest resources. However, the closure of a major wood factory in the South shed jobs and paved the way for organised tree theft, with adverse effects on sustainable forest projects in the South.

According to the 1994 Forestry Law, reforestation sites have been set up with the aim of providing forest products and/or to protect fragile ecosystems. The Bana-Bapouh forest reserve in West Cameroon was planted with eucalyptus to prevent landslips. The plantation negatively affected local livelihoods, which in turn eroded adherence to REDD+ reforestation activities. Locals suggest that eucalyptus has several detrimental effects on both farming and animal husbandry, including heavy water absorption and causing land dryness.

In conclusion, the success of REDD+ schemes would be boosted by improving forest governance and enforcing incentives which support the local timber processing industry, enhance rural living conditions, and alleviate the pressure on forest resources. As with most centrally designed and
locally implemented initiatives, forest emission reduction projects would also benefit from reaching out across different stakeholder groups to take local knowledge into account and to resolve the issue of knowledge discrepancies. Furthermore, policy designers’ ability to propose alternative
livelihood practices that meet implementers’ preferences and mitigate labour implications and other unintended consequences are key to addressing emissions in the forest sector. REDD+ pilots have targeted smallholder farmers; while the rise in rural population densities did drive deforestation across a wide range of settings, technological development and increased access to heavy farm machinery imply that the well-capitalised farmers will soon assume a major responsibility for deforestation; steps should therefore also be taken to steer agricultural modernisation onto a sustainable trajectory.

The pressing needs for poverty alleviation and economic recovery through agricultural expansion, logging, mining, and infrastructure development have put a strain on the country’s forests.
1. We use cookies on our website to give you the most relevant experience by remembering your preferences and repeat visits. By clicking “Accept”, you consent to the use of ALL the cookies. 2. This website is not optimized for Internet Explorer users.
Cookie settingsACCEPT
Privacy & Cookies Policy