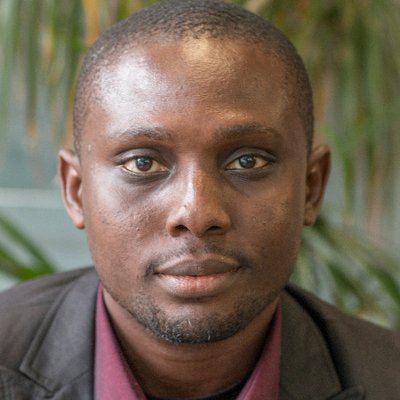 2014 and 2017 Commonwealth Scholar from Nigeria

Adetunji Alex Adekanmbi explains how his work will increase the accuracy of the predicted impact which environmental change will have on the further release of carbon stored in soils, and how regenerative agricultural methods can mitigate the acceleration of climate change by helping to retain carbon in the ground.

Soil is a major reservoir of organic carbon and provides a rich habitat for organisms. The top metre of soil, measured globally, contains three times more carbon than our entire atmosphere. Human activities, in particular agriculture, can cause carbon to be released from the soil at a faster rate than it is replaced, and remain the major sources of carbon dioxide (CO2), methane, and nitrous oxide release. As greater levels of CO2 in the atmosphere lead to higher air temperatures due to the ‘greenhouse effect’, these higher temperatures lead to more carbon being released from the soil, which further warms the air.

The quantity of organic carbon in soil is governed by the rate of carbon which is added through plant residues, including roots and root exudates (the suite of substances that are secreted by the roots of living plants), organic amendments, and the rate of carbon losses. The main way by which carbon is lost from soil is via CO2 release during the respiration of microbial organisms as organic matter (other than plants) decomposes in soil. Changes in soil temperature and moisture, which are generally influenced by climate, largely control the amount of soil respiration and CO2 emissions. Climate change (which is a change in global or regional weather patterns) has been occurring across the globe, and is still expected to occur in such a way that will influence soil respiration and CO2 emissions in the future.

There is a growing global interest in understanding the biogeochemical mechanisms that regulate exchanges of carbon between the land and atmosphere, and how these exchanges will respond to future climate change. Accurate data on soil microbial respiration is necessary to calculate the soil’s carbon removal rate and the ecosystem’s carbon balance. Without an understanding of these results, any mitigation action towards the impact of climate change on CO2 emissions will be difficult.

Land use type, temperature, humidity, nutrients, and vegetation (depending on the local and regional climate and hydrology) are the key drivers of greenhouse gas emissions. Improving the management of soil in a way which optimises these variables can therefore help the storage of carbon and enhance soil fertility and productivity, while buffering both crop and pasture systems against the impacts of climate change.

Agriculture remains the main source of livelihood to most Nigerians. 87% of households in rural areas practice crop farming while 56% farm livestock. It is therefore important to build capacity in assessing how agricultural activities in Nigeria could impact soils and the resultant effects on greenhouse gas emissions. I took it as a personal challenge to chart this course.

The impact of climate change on carbon release

My PhD research at the University of Reading in the UK explores the complex mechanisms by which soil microbial communities perform functions that mineralise soil organic matter and release CO2 into the atmosphere.

Whereas laboratory incubation studies which evaluate the temperature sensitivity of soil respiration frequently test with constant incubation temperatures, they do not represent the real-life situation, where soils undergo oscillations in temperature throughout the day.

My unique work investigates how soil microbial communities react to different patterns of temperature change both in the laboratory and in the field. I am also discovering how these microbial communities performing such functions respond and recover from disturbances and perturbations caused by extreme climatic events. The overall aim of my research is to provide data to increase the accuracy with which we can predict the impact that climate change will have on the further release of CO2 from carbon stored in soils into the atmosphere.

The overarching findings from my PhD research showed that soil microbial communities thermally adapt to the daily maximum temperature within laboratory-controlled conditions in terms of their CO2 release. This implies that the maximum temperature, rather than the minimum or average temperatures, is more important when predicting the response of soils to warming. Climate change experiments and the analysis of climate model predictions regarding the mechanisms underpinning the response of soil microbial functions to warming now need to adopt relevant daily
temperatures, such as maximum and minimum daily temperatures.

Further to the laboratory experiments, I initiated a warming experiment in agricultural plots to also examine the warming effect under field conditions where carbon sequestration (the capturing and storing of carbon) methods are being practised. I found that use of regenerative agricultural practices, such as planting cover crops as a means of carbon sequestration, reduced soil warming. This effect implies that the degradation of soil carbon and subsequent CO2 emissions can be regulated using such practices.

Prior to my PhD research project (and after I returned from Aberdeen following my MSc Soil Science programme), I led, in collaboration with senior colleagues, a team of undergraduate students of Federal University of Technology Minna, Nigeria in an innovative research project. We explored the use of organic amendments to substitute inorganic fertiliser in legume systems. In the project, we tested effects of biochar generated from agricultural bio-wastes including corn cobs, sawdust, swine dung and poultry manure. Biochar is produced when organic material is burned at high temperatures with little or no oxygen availability. The resultant biochar products enhanced the growth and nitrogen-fixing potentials of soybean and cowpea grown in the Guinea savanna soils of Nigeria, which are known to be depleted of carbon and nutrients. This effort is a sustainable means of producing legume crops, and an alternative to use of inorganic phosphorus fertiliser – the production of which releases a greater amount of carbon emissions. The use of biochar also helped in carbon storage in a way that can mitigate CO2 emission. This is because biochar contains about 80% carbon, and around 60% of this organic carbon is stable in soil and can resist decomposition. 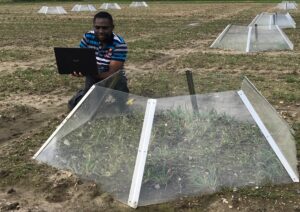 As demonstrated by the findings of my PhD research, other research endeavours, and current trends, we are in dire need of regenerative agricultural practices that can help enhance agricultural productivities. Incorporating such practices into current farming systems in Africa, and especially in Nigeria, will help promote sustainable soil use and management in the face of global environmental change. I am very keen to further assess the resilience and global warming potentials of current farming systems in Nigeria and other parts of Africa in collaboration with other scientists, based both in Africa and elsewhere. I also intend to research more regenerative agricultural practices in Nigeria and Africa to promote sustainable soil use and management while enhancing carbon storage and crop nutrient availability, and while reducing greenhouse gas emissions.

By uncovering more mechanisms by which nature interacts with soil organisms, soil biogeochemical processes, and other natural agents, we can help regenerate degraded landscapes and further build resilient soil for the future. In the longterm, I will seek opportunities to assist governments in
policy formulations which can help mitigate greenhouse gas emissions, decrease environmental degradation, and promote sustainable soil use and management.

My findings showed that the maximum daily temperature, rather than the minimum or average temperatures, is more important when predicting the response of soils to warming.
1. We use cookies on our website to give you the most relevant experience by remembering your preferences and repeat visits. By clicking “Accept”, you consent to the use of ALL the cookies. 2. This website is not optimized for Internet Explorer users.
Cookie settingsACCEPT
Privacy & Cookies Policy