Tackling climate change with small actions: the FebXCyclothon in India

Throughout February 2022, Commonwealth Alumnus Beauty Kumari led a virtual cycle rally, ‘FebXCyclothon’ in Patna, Bihar. The cycle rally was aimed at young people and participants were encouraged to ride a bicycle anytime and anywhere during the weekends in February.

The purpose of the rally was to disseminate information to participants and the local community on the impact of climate change and how small activities, such as riding a bicycle instead of driving a car, can combat these. Beauty targeted youth as they form almost half of the state’s population and as highlighted by UNICEF, youth and children will be worst affected by climate change.

Beauty is currently leading Project Telecare in Bihar for a development organisation with the goal of ensuring access to quality health access to the last mile. Additionally, she is guiding a team at the AADER foundation, which she founded with the vision of creating a just society using evidence-based policy advocacy and programme implementation. Her organisation is implementing projects including Project Siksha Connect, which educates children from vulnerable communities in Uttar Pradesh; Project Mike which builds self-confidence among vulnerable girls and encourage them to speak up; and Project Rolled Away, which provides career assistance to teenagers.

According to one UNICEF report, India ranks fifth amongst the countries most vulnerable to climate change globally. The IQ AI Report 2020 highlighted that 21 of the 30 most polluted cities in the world were in India. As the second most populous country with a population of over 1.2 billion and with the highest number of polluted cities, the impact of climate change is of grave concern.

India’s poorer states are most likely to experience a higher burden of the impact of climate change as they have a lower ability to handle the crisis. Bihar, a state in eastern India, is one of the poorest in the country. Unfortunately, it also has the highest number of districts vulnerable to climate change. Therefore, the state urgently needs to adopt actions to combat climate change and raise public awareness.

Beauty’s ACEF activity sought to address the perception among youngsters that massive, large-scale initiatives from industry and government are required to mitigate the impact of climate change. Her goal in organising a bicycle rally was not only to promote cycling as an alternative mode of transportation, but also to promote simple and easily adoptable practices like using reusable cups instead of disposables, which, if adopted in daily life, can contribute to mitigating climate change and its negative effects on human health.

The event was originally designed to be delivered outside with participants cycling in groups where possible, however due to the third wave of COVID-19 in India and Bihar state, the activity was adapted to virtual delivery. Some participants who could cycle outside did so, whilst those with indoor machines were encouraged to complete the rally in this way. 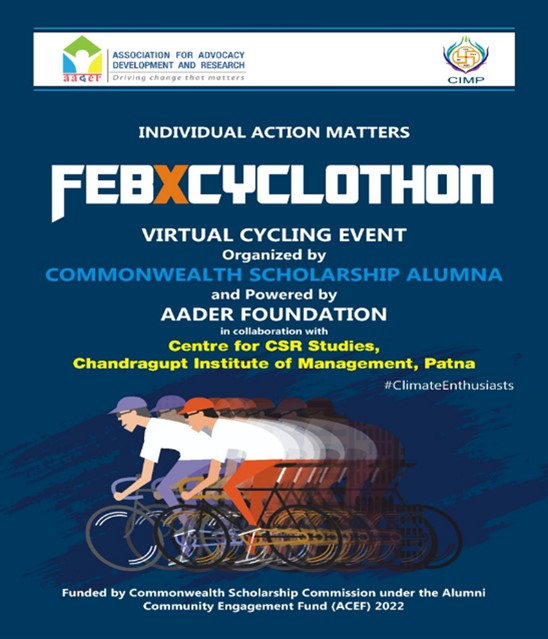 The event was launched in association with the Centre of CSR Studies, Chandragupta Institute of Management Studies, and AADER Foundation. The Centre of CSR studies provided a platform for Beauty to talk to individuals from their institute and AADER Foundation helped with logistics and in creating the activity content. The event was extensively covered by English and Hindi newspapers, which enabled it to reach a large audience leading to higher participation than initially estimated.

124 individuals signed up to the activity and committed to ride a bicycle during the weekends in February 2022. As part of their participation, they completed pre- and post-knowledge assessments on their awareness of climate change and mitigation action.

As well as taking part in the rally, participants received t-shirts and calendars printed with adoptable climate positive action which they were requested to wear when cycling and promoting the activity. Using the calendar, participants were encouraged to implement a new action each month. The actions promoted included: setting air conditioners at 28 degrees Celsius; replacing incandescent light bulbs with fluorescent bulbs; replacing disposable cups with re-usable; and choosing cycling or walking over other forms of transport.

Throughout February, participants were encouraged to share their ride details using ride monitoring apps to track their progress and experience of cycling as an alternative transport. They could also engage through the activity WhatsApp group. 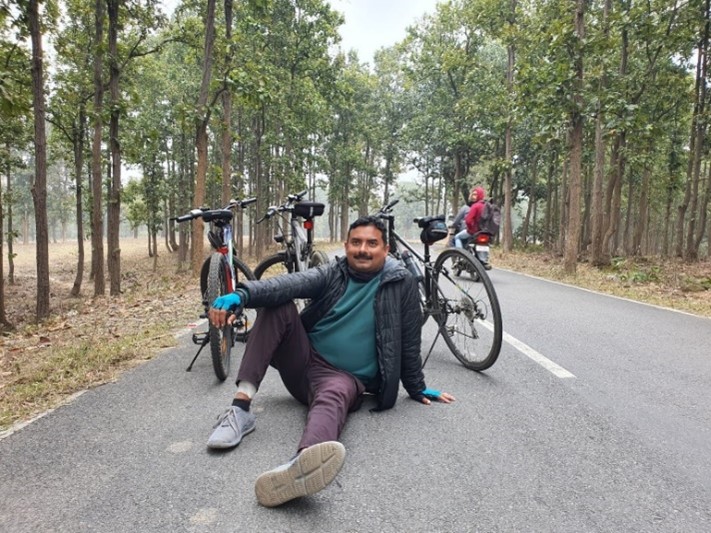 At the end of the month, 78 participants successfully completed the rally, a completion rate of 63%. Following the completion of the rally, Beauty asked participants to complete a post-knowledge assessment from which she was pleased to share the following activity impacts amongst participants:

40% of pledges committed to limit their use disposable items and will carry reusable cups; 30% will reduce food waste as they are now aware of its impact on climate change; and 25% will follow the mantra reduce, reuse, repair, and recycle. Interestingly, only 5% said they will use a bicycle for travel. This may be because the ease of commuting by car or motor bike is still a behaviour to overcome and/or the lack of cycling tracks is discouraging to potential cyclists, despite the success of the bicycle rally.

The activity provided an opportunity for participants to realise that climate change impacts everyone directly and indirectly and that there are positive actions that can be undertaken at the individual level. In targeting youth, which form half almost half of the state’s population, Beauty’s activity was designed to create a ripple effect amongst youth peer groups, households, and school and university communities.

She hopes that by empowering youth with knowledge of climate change and mitigation actions, a new cohort of climate campaigners can successfully advocate to policy makers to adopt climate resilient development.