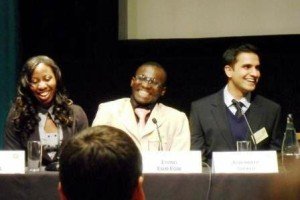 Eyong Egbe, a Commonwealth Scholar from Cameroon studying MSc Biotechnology at the University of Manchester, reached the Grand Final of the BP Ultimate Field Trip 2010, held on 12 April.

Ultimate Field Trip is a team competition for the chance to spend six to eight weeks with BP’s operations in the North Sea. The final was hosted by the BBC’s John Humphrys.