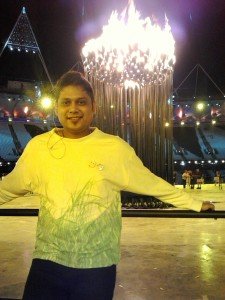 Padmraj Patil with the Olympic cauldron

Padmraj Patil (2011 Commonwealth Shared Scholar from India, MSc Water and Waste Water Engineering, Cranfield University) participated in the London 2012 Olympic Games as a performer in the opening ceremony and as a marshal for the athletes. He recalls ‘It was indeed a once in a lifetime opportunity for me. I was completely lost in the moment when I saw a massive crowd cheer us. It’s been an amazing experience, working with a talented team led by Danny Boyle and making friends with the other volunteers.’

In particular, Padmraj felt privileged to be standing near Her Majesty the Queen whilst acting as a marshal to the Olympians entering the stadium, and he was especially pleased to be assisting with the Indian Olympic team. ‘I am grateful to the Commonwealth Scholarship Commission for granting me a Commonwealth Scholarship and the opportunity I have had to be a part of this spectacular ceremony.’ View Padmraj talking about his experiences.

The Commission would like to hear from any alumni who were involved in the Olympics – did you provide support in some way, or even participate yourself? Email the Alumni Office to let us know.