On 7 September 2020 the CSC held its virtual Farewell event for Commonwealth Scholars who are approaching the end of their scholarship, before they go on to become Commonwealth alumni. The event was a chance to celebrate Scholars’ achievements and hear about the broad range of research work that they are involved in. The event was led by the Chair of the CSC, Richard Middleton, and we were pleased to be joined by guests from the Association of Commonwealth Universities (ACU), including Chief Executive and Secretary-General, Dr Joanna Newman, and Taylor & Francis to mark this special occasion for our departing Scholars.

Welcome to the Commonwealth Alumni Network

Richard Middleton opened proceedings by welcoming guests to the CSC’s first ever virtual Farewell event and praising the hard work of Commonwealth Scholars for always striving to succeed in their studies and research. Richard spoke of the incredible talent amongst Commonwealth Scholars and commended Scholars’ resilience in overcoming the difficulties they had encountered this year. 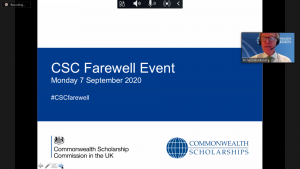 Commenting on the scholarship journey, Richard emphasised the important roles that Commonwealth Scholars would play as engaged and active alumni. Although their period of studies was drawing to a close, Scholars would always remain an integral part of the Commonwealth community, and Richard encouraged all present to stay connected with the CSC and fellow Scholars through the Alumni Network.

A message from Lord (Tariq) Ahmad of Wimbledon

Though he was unable to join us for the event, the Minister of State for South Asia and the Commonwealth, Lord Ahmad, sent his warm congratulations and called on Scholars to continue to ‘achieve great things’ as leaders in their own countries. Noting that ‘Scholars just like you have contributed much to development and to improving the lives of others’, Lord Ahmad hoped that the scholarship experience would propel Scholars to success in their future careers.

Following Richard’s address, we welcomed Janet Remmington, Global Portfolio Director: Humanities, Media, Arts at Taylor & Francis, who talked about the Commonwealth Scholar Best Journal Article Prize. This annual prize recognises exceptional publications in the interests of knowledge advancement and society by early career researchers and is awarded to a Commonwealth Scholar who is completing or has recently completed their doctoral studies. Commending the high quality of entries for the 2020 prize, Janet introduced this year’s winner of the award, Dr Dorcas Obiri-Yeboah for her article on Epidemiology of cervical human papillomavirus (HPV) infection and squamous intraepthethial lesions (SIL) among a cohort of HIV-infected and uninfected Ghanaian women.

Presenting on the six CSC Themes

Dr Obiri-Yeboah (2013 Split-site Scholar from Ghana) presented a summary of her research and outlined the impact it would have in helping women with cervical cancer and preventing further cases in the future. Dr Obiri-Yeboah’s research falls under the CSC theme of Strengthening Health Systems and Capacity and drew several questions from Scholars at the event during the Q&A session. Following this, we heard from five Commonwealth Scholars about their research, outlining the impact it would have and the likely beneficiaries that would result from it. 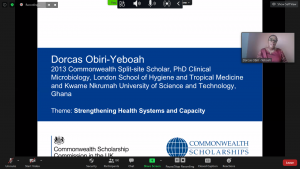 Dr Dorcas Abiri-Yeboah presents her research at the Farewell event

Wiza Mphande, a 2017 Commonwealth Scholar from Zambia, presented on his research into crop physiology and its impact on sustainable food production. Wiza has been studying for a PhD at Harper Adams University and his research falls under the CSC theme Science and Technology for Development.

Patience Kaneene, a 2019 Commonwealth Scholar from Uganda, presented on her research into the future of transportation and infrastructure developments in Kampala. Patience has been studying for a Master’s at the University of Leeds and her research falls under the CSC theme Promoting Global Prosperity.

Monica Janet Adams, a 2019 Commonwealth Scholar from Sierra Leone is, presented on her research into the economic impact of Covid-19 and ways to mitigate the damaging effects in Sierra Leone. Monica has been studying for a Master’s at the University of Birmingham and her research falls under the CSC theme Access, Inclusion and Opportunity.

Manoria Niingo, a 2019 Commonwealth Scholar from Namibia, presented on her research into wastewater engineering and the efficient management of natural resources. Manoria has been studying for a Master’s at Cranfield University and her research falls under the CSC theme Strengthening Resilience and Response to Crises.

Ambrose Njeru, a 2019 Shared Scholar from Kenya, presented on his research into cyber security and preventative measures to protect institutions vulnerable to cyber attacks. Ambrose has been studying for a Master’s at Queen’s University Belfast and his research falls under the CSC theme Strengthening Global Peace, Security & Governance.

Congratulating Scholars on their achievements

The event concluded with an address by Dr Joanna Newman who congratulated all our departing Scholars on their terrific achievements and highlighted the contribution they all make to the Commonwealth through their research and development impact.

The CSC would like to thank the Commonwealth Scholars and alumnus who gave their research presentations and to guests from Taylor & Francis, the ACU and CSC Commissioners and staff for their contributions to the Farewell event. The CSC would also like to thank all Scholars and Fellows who attended the event and made it such a successful occasion.