On 2 July 2021, the CSC held its annual Farewell Event for Commonwealth Scholars approaching the end of their scholarship. This year’s virtual event provided a forum to celebrate Scholars’ achievements, enabling Scholars to reflect on their scholarship experiences and look ahead to the opportunities for development impact and career progression they will have as Commonwealth Alumni.

The Farewell Event was hosted by the Chair of the CSC, Richard Middleton, and featured guest talks by Dr Margaret Alison Jones Williams, Dr Joanna Newman, and current Commonwealth Scholars Zaharah Namanda and Deeksha. Staff from the CSC Secretariat as well as CSC Commissioners and special guests from the CSC’s main funder, the Foreign, Commonwealth and Development Office (FCDO), joined Scholars at this important occasion.

Congratulating Scholars on their achievements 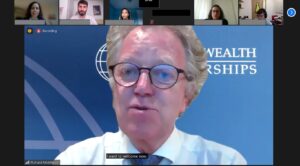 Richard Middleton introduced the Farewell Event, welcoming Scholars and guests who were following the event from across the UK and the Commonwealth. As participants joined the event, they were greeted with a showreel of Scholars’ favourite memories and photos from their scholarship. Highlighting the experience shared by Commonwealth Master’s Scholar Aaliyah Vayez, Richard spoke warmly of the perseverance and commitment of the Scholar community in overcoming the difficulties of the past year.

Following on from this, Richard outlined the programme for the Farewell Event, which included speakers on the CSC’s priority themes of climate action, girls’ education, and resilience, before introducing a specially recorded message from the Minister of State for South Asia and the Commonwealth, Lord (Tariq) Ahmad of Wimbledon.

A message from Lord (Tariq) Ahmad of Wimbledon

In his recorded address, Lord Ahmad congratulated current Scholars on the hard work and dedication to studying and learning that they had shown during their scholarships. Acknowledging the practical difficulties that Scholars had faced as a result of Covid-19 pandemic, Lord Ahmad praised the efforts of those studying remotely in their home countries, and expressed a hope that with greater collaboration, the global community could to overcome the ongoing challenges it posed.

Lord Ahmad paid tribute to the collective achievements of past Commonwealth Scholars who had “made huge contributions to improving the lives of their communities” as well as in many cases becoming notable leaders in their own countries. Looking ahead to November’s COP26 Summit in Glasgow, Lord Ahmad highlighted this as an key example of international cooperation to “set challenging targets…[that] meet the collective challenge of climate change to ensure our future generations also enjoy what we enjoy today.” Lord Ahmad commended the important work of the CSC and Scholars in driving research on climate change and girls’ education, “reflecting the UK Government’s ambition to help 40 million more girls into primary and secondary education in developing countries by 2025.”

Finally, Lord Ahmad encouraged Scholars to use their wealth of knowledge and experience to take a lead “in making the world a fairer and more sustainable place” for all.

The impact of climate change: how we can act to leave no one behind 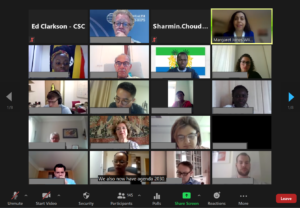 The keynote address at the Farewell Event was delivered by Dr Margaret Alison Jones Williams, Deputy Resident Representative for Suriname at the United Nations Development Programme and 1993 Commonwealth PhD Scholar from Jamaica.

After thanking the assembled Scholars and guests, Dr Jones Williams began by outlining what is really meant by climate change and how its impact could be felt in terms of resource scarcity, increasing human health problems, and disproportionate negative effects on women and indigenous groups. Dr Jones Williams observed that there were two main ways to tackle the problem of climate change: mitigation measures that reduce or remove greenhouse gas emissions; and adaptation measures that “minimise the risks posed by climate change through policy, behavioural change or structural measures”.

After discussing the detrimental impact that climate change can have on development, Dr Jones Williams considered the ways in which everyone can play a part to address the challenges it presents. These included raising self-awareness, sharing information, supporting governments and decision-makers in positive change, and being responsible for consumption. Lastly, Dr Jones Williams answered several important questions from Scholars about her work and ambitions for climate action.

Zaharah Namanda, 2020 Commonwealth Shared Scholar from Uganda, presented her work on bilingual pedagogy and wellbeing for in girls’ education for refugees in Uganda. Focusing on the significant impact that language of instruction has on girls’ experience of learning and overall wellbeing, Zaharah emphasised the critical need to prioritise bilingual pedagogy in order to support refugee girls and better facilitate their participation and learning in host countries.

Deeksha, 2020 Split-site Scholar from India, presented her research on migration for healthcare in India where rural populations relocate to urban areas as a healthcare seeking strategy. Deeksha’s research focused on the experiences of people migrating to urban areas and considered how India’s healthcare system could become more resilient and responsive to the changing needs of its population, whilst also looking at the way cities might be adapted into more caring spaces for those in need.

After the presentations, Scholars had the opportunity to network and share their scholarship experiences with fellow Scholars during a breakout session. Whilst this allowed Scholars to reflect on the impactful work they had done over the course of their scholarship, it was also a chance to find out more about the work of other Scholars and build upon their shared connections. With support from Regional Network Coordinators and CSC staff, Scholars were encouraged to think about how their research intersected with other disciplines and could have broad development impact.

Welcome to the Commonwealth Alumni Network 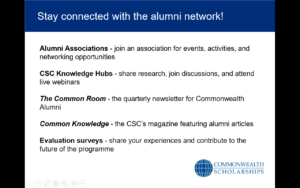 The event concluded with an address by Dr Joanna Newman who praised Scholars on their achievements and highlighted the contribution they all make to the Commonwealth through their research and development impact. Reiterating the strength of the Commonwealth Scholar community, Dr Newman urged Scholars to remain engaged and active through the Alumni Network after their scholarship.

Commonwealth Scholars can see our useful Alumni Network welcome guide for ways of staying connected after their scholarship.

The CSC would like to thank the Commonwealth Scholars and Alumnus who gave their research presentations and to guests from FCDO, the ACU, and CSC Commissioners and staff for their contributions to the Farewell Event. The CSC would also like to thank all Scholars who attended the event and made it such a successful occasion.