Development and the media: empowering marginalised groups through solutions journalism

Journalism offers a way to inform and empower people and reframe the narrative around the developmental challenges they face. In December, we spoke to Hamna Iqbal Baig, a 2020 Commonwealth Scholar studying MA Multimedia Journalism at the University of Kent, about what drives her passion for solutions journalism and supporting underrepresented groups in Pakistan.

My Commonwealth story began on a typical day in the office of one of Pakistan’s leading news channels. I had been completing an internship at the news channel as part of my Bachelor’s degree in Media Science and, although there were other women journalists working for the channel, I was often the only woman in the newsroom when they were on assignments. As my internship responsibilities were somewhat more limited, I was used to working alongside just male colleagues on a day-to-day basis. It was on a day such as this that reports of social media starlet Qandeel Baloch’s death – a case of honour killing ­– reached the newsroom where I was working.

I remember being struck by the peculiar way that my newsroom colleagues responded to these reports, assuming that Qandeel was in some way to blame because she challenged societal double standards and defied the norm. This affected me because I thought that if there had been more women journalists in the newsroom at the time, the portrayal of Qandeel’s story could have been very different. Instead of focusing on Qandeel’s culpability, the story might have highlighted the role that the media played in instigating negative public opinion against her. 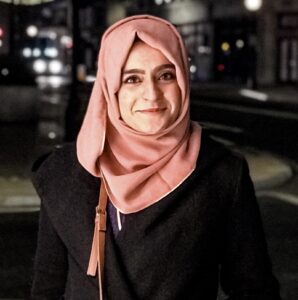 The experience of women in Pakistan can be very restrictive with limits on opportunities for education and employment. Yet on the other hand, some women do benefit from a liberal upbringing and I am very aware that this plays a role in how people are perceived and the agency they have. Though my family have always been supportive of my decision to pursue journalism as a career, I have also had to challenge received opinions at times and ask difficult questions to realise my ambition.

My Scholarship course at the University of Kent has helped me to confront these challenging issues in journalistic practice and wider society. The course is excellent because it combines theoretical and practical elements and it allows me to work as a student journalist whilst studying. I have a keen interest in reporting on social issues, particularly women’s and transgender people’s rights, as well as social entrepreneurship and cultural topics. So far during my Scholarship, I have written a story about a UK-Pakistan partnership that is helping women artisans from marginalised communities to sell their products online and tap into international markets. Currently, I am working on a story about migrants arriving in Dover via France from a human rights angle and looking at what happens to unaccompanied children when they cross the English Channel.

During the course, I have also developed my knowledge of different areas of journalism, for example reporting on conflict. This really opened my eyes to the acute difficulties that journalists face when working in warzones and reporting on conflicting narratives that emerge during conflict situations.

My aim after the Scholarship is to create a solutions journalism platform. Solutions journalism is an exciting model of journalism that looks at the whole picture — the problem and the response by not only highlighting a social problem but also how communities are effectively tackling serious problems. I intend to involve young journalists in Pakistan in this project by training them, particularly those from marginalised backgrounds who may not have access to formal educational training. Although this critical part of news is currently missing in my country, my hope is that with a dedicated platform that supports aspiring journalists and promotes their work this approach can gain increased momentum and bring about meaningful change throughout the society.

One of my stories, Opening doors: Pakistan’s first transgender beauty salon, is also featured on the Solutions Journalism Tracker, a database of responses to the world’s most pressing social problems.

This degree will be a stepping stone for me to expand my journalistic horizons and tell multi-platform rights based stories that hopefully create an impact; from investigating the plight of refugees, to exploring how to better the socio-economic prospects of Pakistan’s transgender community, charting the need for family planning for the country’s growing population, to the need for climate reform and their current impact on indigenous communities.

Although I have only been working in the media for about two and a half years, I knew even as a child that this is what I wanted to do – I like talking to people, listening to their stories, and amplifying the voices of those who do not make it to mainstream media.