This is an article from the CSC Development Theme: Strengthening global peace, security and governance
Alumni CSC development themes policy 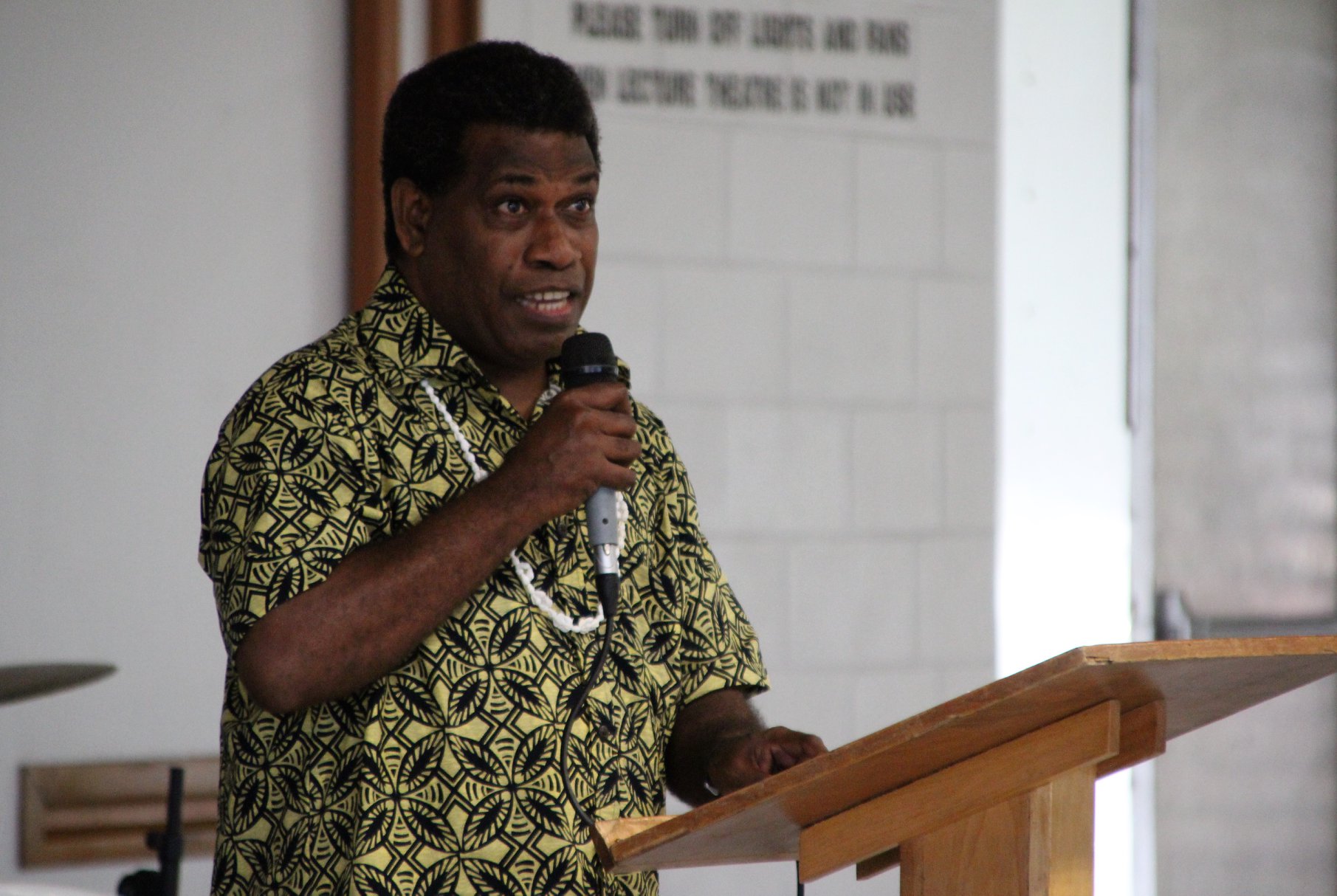 The Solomon Islands faced a period of civil unrest between 1998-2003, in which conflict, often referred to as the tensions or ethnic tensions, broke out. During this time, Commonwealth Alumnus Gordon Nanau was involved in negotiations led by the Australian government. As a development expert in the region, Gordon continues to contribute to the development of strong and stable governance and practices in Solomon Islands through training, capacity building, and consultancies. Here, he shares his most recent work in strengthening policy development and creating policies to safeguard future generations.

Gordon has been engaged in several consultancy projects aimed at strengthening governance in Solomon Islands and the Pacific region. Most recently, in 2015-2017, Gordon was engaged in a project to train and build capacity amongst senior public servants in the governments of Solomon Islands, Kiribati, and Vanuatu in developing public policy. The programme targeted chiefs, directors, and senior public administrators, and focused on building skills in analysing public policy, identifying problems, and drafting new policy. Gordon notes that the officers involved in the training had a number of policies drafted or in place, however in the majority of cases, these were developed by outside consultants, due to a lack of in-house expertise in this area, and did not necessarily address the national needs of the countries.

Country context and Gordon’s own knowledge of the Pacific region, therefore, was an important element in the training he helped develop and deliver.

“Because I’m from the region, I know the protocols at the local level and at the government level. So, the sorts of materials that are used to engage them with are the materials that are relevant for their own situations. And just getting somebody from the region to also engage with them, to them is a very good thing because I can understand where they’re coming from because I’m one of them.”

In developing materials that were specific to the governments and countries, Gordon was able to provide real and contextual examples in his teaching which officials could relate to and understand how policy approaches and development could be applied to these. Despite the level of seniority of those attending the training, Gordon was pleased to see real engagement and enthusiasm for the opportunity. In all three countries, participation was supported by respective governments, demonstrating commitment to improving policy development and leadership in the region.

A further important aspect of the training was that those completing would be awarded a Postgraduate Certificate in Management and Public Administration by the University of the South Pacific (USP). In many cases, the public servants completing the training had not been afforded higher education opportunities to develop their skills, and the training offered both a higher education qualification and the opportunity to qualify for further university courses. Gordon reports that following the training, he has seen a number of those who completed pursue further studies, however for him, his involvement in the training is reward enough.

“But for me the satisfaction is that I helped in a small way to build capacity of senior public servants across some of the countries in the region.”

The importance of and need for higher education qualifications amongst people living in the Pacific region, and in particular the Melanesian part of the Pacific which includes Solomon Islands, was a driving factor in Gordon applying for a Commonwealth Scholarship and undertaking doctoral study. For Gordon, completing his PhD in Globalisation, Ethnicity and Governance at the University of East Anglia has had a significant impact on his career and opened opportunities for him to contribute to the development of governance in the region.

“… because of the training that I had under the Commonwealth Scholarship, people also refer things to you. I built my network over time and when there’s a need for some expert inputs regarding the Solomons or the Pacific… that was how I got involved in some of the research projects, some of the consultancy projects and so on and so forth.”

During his doctorate, Gordon developed a range of research skills which he feels have played an important role in the training he offered for senior public servants.

“What I found useful were the skills that I acquired because of the research training I did under the Commonwealth Scholarship. I think the strong grounding in research and how research is undertaken in the field helped me to be able to impart that knowledge.”

As a senior lecturer, teaching undergraduate and postgraduate students, Gordon also draws on the teaching style of his PhD supervisors, whom he credits for creating a welcoming and positive learning environment.

“… when I’m engaging with students at the moment, that’s the same attitude I impart on my students as well and I see a lot of positivity coming out of that. My students, especially the research students, are doing well because of the type of relationship that I had with them. And that was made possible because of my exposure to my supervisors under the Commonwealth Scholarship.”

As a known expert in development in the region, Gordon is called on to consult across a range of projects, some of which concern areas of governance and policy he has not worked in before.

Most recently in 2019/20, this included reviewing the National Children Policy and action plan for the Solomon Islands government to inform the development of a new policy. Approximately 40% of the Solomon Island’s population is below 18, and who in 30-50 years’ time will represent the workforce and leadership of the islands. As such, a new and robust policy was required to support child development and safeguard the future population. The new policy is designed to address a range of issues, including protection, survival, development, and participation of the child.

For Gordon, this work presented new challenges and opportunities. He notes that a lot of the work relating to children and issues in the Solomon Islands is supported by international organisations and bilateral partners, such as UNICEF, World Vision, and Save the Children. Working with these stakeholders and the policy materials exposed Gordon to a new area of development and a way to contribute to an important area of policy.

“… the interesting thing for me is that my background is mostly in development studies and development issues, so when I was asked to go in and assist, although I worked in the development area for a while, children issues were a new thing to me because I haven’t engaged with that kind of material nor with the stakeholders that are involved in that area before my engagement with that policy.”

Prior to his Scholarship, Gordon was actively working in development in Solomon Islands, most notably between 1998-2003, in which conflict, often referred to as the tensions or ethnic tensions, broke out. At this time, Gordon was involved in negotiations organised by the Australian government to address the issues between the two conflicting parties.

One of the issues currently, and which continues to contribute to tensions, regards land and leadership. In a strictly indigenous Solomon Islands society, Gordon stresses there is no individual ownership of land, however as a result of colonialism, and growing connections with the wider world through business and trade, a modern land system was adopted, where land is allocated and owned by individuals. This results in growing tensions between these conflicting world views on land and how individuals, as landowners, can benefit or profit from land resources.

As a result of this early engagement, Gordon continues to remain engaged in leadership and land summits to support peaceful development, and to address issues critical to peace, stability, and security in Solomon Islands.

Currently, Gordon is collaborating with researchers at the University of Birmingham in the UK and LaTrobe University in Australia as part of a research project into citizen state relationships in Solomon Islands, funded by the Development and Leadership Programme based at Birmingham, and the Australian government Department for Foreign Affairs and Trade (DFAT). The project will seek to understand leadership in the context of the islands, and learn from successful leadership examples, which are often overshadowed by the recent history of corruption, conflict, and civil unrest.

“… it’s going to be a very fascinating research project because we’re looking at leadership. But instead of looking at negative leadership that’s usually promoted or published about the Solomons and the Pacific, we are looking at pockets of successful leadership.”

It is through this early work and his ongoing research and consultation on governance and development issues that cements Gordon’s commitment to his work and the importance of Pacific islanders in leading development across the region.

“… in those processes, and as a Solomon Islander, I realised that there are critical and sensitive issues that we should be very conscious of when we make decisions. Land and leadership are critical issues for Solomon Islands in ensuring stability.”

Gordon Nanau is a 2005 Commonwealth Scholar from Solomon Islands. He studied for a PhD in Globalisation, Ethnicity and Governance at the University of East Anglia.