The Commonwealth Scholarship Commission in the UK (CSC) and Taylor & Francis Group are delighted to announce Dorcas Obiri-Yeboah as the winner of the 2020 Taylor & Francis Commonwealth Scholar Best Journal Article Prize, for her article Epidemiology of cervical human papillomavirus (HPV) infection and squamous intraepithelial lesions (SIL) among a cohort of HIV-infected and uninfected Ghanaian women, published in BMC Cancer.

Dorcas is a 2013 Split-site Scholar from Ghana. She studied for a PhD Clinical Microbiology at the London School of Hygiene and Tropical Medicine and Kwame Nkrumah University of Science and Technology, Kumasi. Her article, which draws on research conducted during her Commonwealth Scholarship, contributes to the evidence on the impact of HIV infection on the epidemiology of HPV infection and cervical lesions. 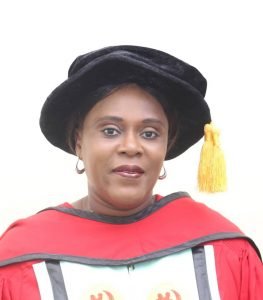 Headshot of Dorcas Obiri-Yehoah in cap and gown

In Ghana and in most parts of sub-Saharan Africa, cervical cancer is the second biggest contributor to cancer related mortality among women, and more than 70% of HIV infections occur among women. Despite this, there has been no national cervical cancer prevention policy and while the National AIDS/STIs Control Program has focused on HIV and other co-infections, such as tuberculosis, limited research has been conducted into HPV related cancers, including cervical. Dorcas’ research compares HIV infected and uninfected women and contributes to the evidence on the impact of HIV infection on the epidemiology of HPV infection and cervical lesions.

Her research findings concluded that HIV-1 infected women bear significant burden of HPV infection and related disease and that prevention and screening programmes should be developed for this population in Ghana. Following the publication of her research, cervical cancer prevention in Ghana is receiving more attention. Dorcas’ work has contributed to the development of an established cervical cancer screening system at the study site of Cape Coast Teaching Hospital (CCTH), making screening more accessible and affordable to women seeking care at the facility.

In addition, she has established collaborations with a team of researchers in Burkina Faso at the Pietro Annigoni Biomolecular Research Center (CERBA) and Laboratory of Molecular Biology and Genetics (LABIOGEN) in Ouagadougou. As part of this research group, Dorcas has continued to research and publish on the epidemiology of HPV infection in sub-Saharan Africa and evidenced the need for stronger policies on HPV vaccination and screening. She is currently developing a proposal to seek funding for further research on aspects of the HIV/HPV and oncology among women and men with a team of researchers in southern Africa.

The 2020 competition received 69 entries from current doctoral Commonwealth Scholars and Commonwealth Alumni. Alongside the winner, judges also selected three highly commended articles. They are as follows:

The winner and highly commended articles were chosen by a panel of experts drawn from multidisciplinary backgrounds: Professor Jonathan Wastling (Pro-Vice Chancellor and Dean of Natural Science at Keele University); Professor Mark Cleary (former Vice-Chancellor of the University of Bradford); Professor Anne Anderson (CSC Commissioner and former Vice Principle, Head of the College of Social Sciences at the University of Glasgow); and Dr Jonathan Jenkins (CSC Director of Operations).

The Taylor & Francis Commonwealth Scholar Best Journal Article Prize is awarded to a Commonwealth Scholar who submits the most outstanding article published in a peer-reviewed journal. This annual prize, first awarded in 2012, aims to encourage and reward the publication and research achievements of Commonwealth Scholars who are completing or have completed their doctoral studies within the last five years.