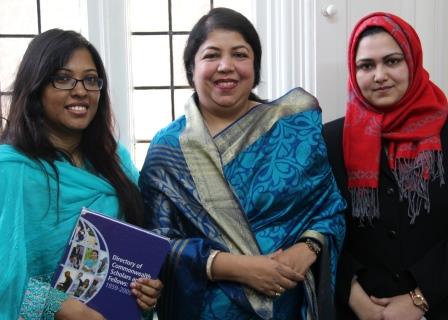 Shirin Sharmin Chaudhury, Speaker of the Bangladesh Parliament and Commonwealth Scholar, believes that the most important contribution made by the Commonwealth to Bangladesh is education.

Shirin, who was recently appointed Chairperson of the Commonwealth Parliamentary Association (CPA), also told the CSC that her Commonwealth Scholarship was a ‘significant and integral part of my life’. She was awarded a Scholarship in 1996 to study PhD Law at the University of Essex.

Shirin is visiting London this week, and spoke at the Commonwealth Day Observance at Westminster Abbey on Monday, 9 March. She spoke about the importance of empowering young people and women, to an audience that included HM The Queen, dignitaries from across the Commonwealth, and nearly 1,000 schoolchildren.

Our full interview with Shirin will be published in the next issue of Commonwealth Scholarships News.