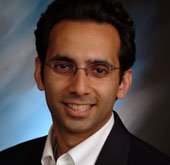 Asheesh Advani (1994 Commonwealth Scholar, DPhil in Management, University of Oxford) shares his experiences of entrepreneurship and founding his own company, CircleLending.

Asheesh Advani grew up accustomed to new starts and challenges. He was born in Mumbai, India in 1971, where the family had emigrated from the province of Sindh after the formation of Pakistan and India in 1947. Asheesh and his family moved to Toronto, Canada when he was six years old. He remembers it as a great adventure: his first plane ride and stops in Amsterdam and the Middle East along the way. He has happy childhood memories, and experienced ‘a typical immigrant experience’. His father had transferred to Canada as an engineer at IBM and attended night school to advance his studies in computer science. His mother worked as a secretary. There were many moves, from an apartment to a small house to a bigger house. Asheesh recalls, the message was clear: ‘hard work pays off’.

An early interest in business

Asheesh’s high school education was at the University of Toronto Schools (UTS), an institution operated within the public university but partially funded through tuition and generally perceived as an elite private education. He commuted three hours daily by public transport between home and school. Asheesh describes UTS as ‘a formative experience and a doorway to a whole new set of opportunities’.

For his undergraduate studies, Asheesh went to Wharton, the business school at the University of Pennsylvania in the USA, graduating with a degree in Economics and Finance. He combined college with a diverse range of working opportunities: at a Canadian investment bank, at a fashion magazine in New York, at a policy think tank in Washington DC, and taking a semester off his junior year visiting India with a fellow student to work on a feasibility study for an Indian joint venture for a US investment bank.

These experiences expanded Asheesh’s cultural and professional horizons, and highlighted his interest in seeking out new and challenging opportunities. While at the magazine, he remembers doing restaurant reviews for some of New York’s posh spots.

At one tasting, I had to try gazpacho and said to the chef “the soup is cold”. That was how clueless I was.

Working in India also provided valuable insights into a very different working environment. After a few months, Asheesh decided to return to the USA as he was not prepared to leave college and move there to launch the joint venture. Months earlier, he had received an offer from Monitor, the management consulting firm, for a summer position in Toronto.

It was fabulous. I found it to be an optimistic, energetic, and forward-thinking environment.

During Asheesh’s final spring semester at Wharton, he had explored postgraduate study options in England. He was interested in the commercialisation of public sector organisations and saw England as a leader in that movement. He was awarded a Commonwealth Scholarship and, in consultation with his advisor at Monitor, decided to go to the University of Oxford. Asheesh studied Development Economics at St Antony’s College, and found that it broadened his academic interests.

You study a wide range of things including anthropology and the political underpinnings of economic policy. It bought my two worlds together – policy and business – in an illuminating way.

Asheesh chose to concentrate his thesis on privatisation and decided the airport industry was a prime topic, as it was among the first type of monopoly social services to undergo commercialisation, foreshadowing what would happen to schools, hospitals, and other public services. This innovative research also offered an opportunity to work with the University of Oxford in curriculum development.

My research included a survey of managers at over 200 publicly and privately-owned airports in 67 countries, comparing their level of market orientation. That work led to an opportunity to participate in curriculum development for Oxford’s new business school. Oxford is traditionally strong at public administration but they wanted to get into public management and social entrepreneurship, looking at recipients of social services as customers rather than citizens.

Following his DPhil at Oxford, Asheesh worked on a project at the World Bank in Washington, DC, and this turned into a full-time role in a market-oriented group, Finance and Private Sector Development. The bank was developing an interest in entrepreneurship and was producing one of the first studies to look at how small and medium enterprises spur growth. Asheesh recalls:

It was a great project. I felt like I was on the forefront of new directions in World Bank policy and practice.

He learnt about how businesses are financed around the world, both informally and formally.

I became interested in ‘social lending’ – not microfinance, but loans between individuals. That idea would stick with me and become the foundation for CircleLending.

After his marriage, Asheesh moved to Boston, working at Monitor’s Boston office. He followed up on his interest in social lending, and spent six months exploring its  commercialisation potential in the USA. He concluded it was a large market with little competition and high gross margin potential, and that it benefited from emerging consumer web trends such as peer-to-peer connectivity and social networks. He developed a business plan for an online peer-to-peer (P2P) loan administration company offering information and services (such as loan documentation, electronic billing, payment processing, tax and legal filings) for private transactions. He named the company CircleLending because it would target friends, family members, and business associates within a borrower’s social circle.

In July 2001, Asheesh launched his new company with one employee, some office space at the Monitor office, $30,000 in seed capital from his own family and friends, and $350,000 from early investors.  In 2002, CircleLending developed and refined prototype products and pricing schedules, conducted mostly word-of-mouth marketing, and generated approximately $2 million in loan volume. But the firm was looking to grow and needed funds for marketing and distribution, and Asheesh decided to initiate a round of angel funding and eventually raised venture capital financing.

CircleLending was attracting great interest, revamping product lines and implementing a comprehensive marketing plan including search engines, partnerships with financial intermediaries, publications, distribution partnerships, and public relations campaigns. The company’s success continued. Business grew consistently by 25% per quarter from 2003 to 2007, generating over $200 million in loans. The social lending category it had pioneered had grown to over 20 companies in over ten countries, and CircleLending accounted for over half of global market volume. The impact of Asheesh’s venture was recognised in the media. The company was profiled as an innovator, with coverage in Business Week and The Wall Street Journal.

Greater investment would enable the company’s continued growth, and CircleLending was acquired by the Virgin Group, a deal that was concluded in May 2007 with the proviso that Asheesh stay on as CEO of the new Virgin Money USA. Asheesh was pleased with the transaction, but understood the challenge that faced him.

Virgin Money already existed in three other countries – Britain, South Africa, and Australia. We were now part of a global enterprise and our little company had the rights to use the brand for a broad range of financial services in the United States. We knew then that Virgin would be expanding and adding product categories. It was an awesome responsibility. We felt like stewards of the brand, rather than founders.

Despite an economic downturn in 2008, the company’s revenues increased substantially, products were rebranded, and new product lines introduced via the acquisition of the assets of a mortgage lending company. However, in mid-2009, a number of factors converged to spur Asheesh’s decision to leave Virgin. A restructuring of the Virgin Group was taking place, with changes in leadership and strategic direction. In addition, Virgin’s move into banking was extending beyond his core strengths and interests, something he had known would happen at some point.

The parting was amicable, and leaving Virgin Money also offered Asheesh the opportunity for new challenges, which he relished. He took on a role as a senior executive at Thomson Reuters, helping the company expand into new markets in financial services and social media. For the past two years, he has been developing new businesses and traveled extensively with the company. In 2010, Asheesh and his family spent several months in Bangalore, where he was able to introduce his six-year old twin sons to Indian culture. He jokes that ‘the irony of bringing my sons to India at the same age that I left India has not escaped me’. Asheesh and his family are now back in Boston, and he serves as an adviser and supporter to various entrepreneurial companies, universities, and public institutions. He fondly remembers his days at Oxford as a Commonwealth Scholar, and longs to return one day.