This year’s CSC Farewell Event took place on 7 July 2016, and was attended by 150 Commonwealth Scholars and Fellows from 25 countries, studying or working around the UK. Kindly hosted by the High Commission of Canada at Canada House in London, the event was a celebration of the achievements of Scholars and Fellows in successfully completing their awards.

The guest of honour was Mark Carney, Governor of the Bank of England and former Commonwealth Scholar. Mark, who was awarded a Commonwealth Scholarship in 1991 to study for a DPhil in Economics at the University of Oxford, spoke about the great privilege of being a Commonwealth Scholar, and the sense of responsibility that comes with it to return and give something back to your home country. He encouraged the Scholars and Fellows present to maintain their passion for their field, stay close to what they believe in and interests them the most, and work with people and institutions that they respect.

Mark went on to talk about the importance of being flexible and adventurous in one’s career, and advised Scholars to pick opportunities where they will have the chance to learn new things. ‘When you think you think about your careers – how you give back, in what ways you will decide to give back – give others the opportunities or even better opportunities than you have received,’ he said. ‘It is incredibly important to be prepared when those opportunities come – to seize them, make a difference, and make us even prouder than we all are today.’

Other speakers at the event included HE Gordon Campbell, High Commissioner for Canada, and Richard Middleton, Chair of the CSC. HE Mr Campbell spoke of the changing world and the role of Commonwealth Scholars in making it better. ‘We are counting on you as Commonwealth Scholars and Fellows to go around the world, share your knowledge, and seek new paths and new ways forward that bring us together as a human family,’ he said. He wished the Scholars and Fellows the best of luck as they go forward in life, and ended by saying ‘Whatever you can do or dream you can, begin it. You are the promise of the future’.

Richard Middleton emphasised that completing a Commonwealth Scholarship is not the end of a journey, but rather the beginning of the next stage. ‘You are embarking on the next stage of your life – we want you to stay with us for life. That is the commitment you have made to development and leadership,’ he said. ‘We want to hear from you and support you as you make change in the future.’

At the event, Commonwealth Scholars and Fellows had the opportunity to find out how they can continue to be a key part of the CSC community as active alumni, and contribute to the future strength of the scholarship scheme as part of the evaluation programme. They also had the opportunity to make important contacts for the future through sharing experiences and networking with each other, Commonwealth Scholarship Commissioners, and British High Commissioners, as well as representatives from other Commonwealth organisations, the British Council, the Department for International Development, and the Foreign and Commonwealth Office, who were also in attendance.

Pictures from the event can be viewed on the CSC Flickr site. 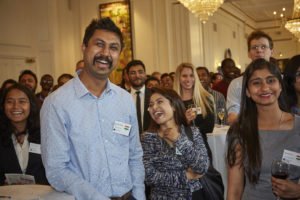