In conversation with Dr Awino Okech on gender and sexual rights

On Tuesday 18 May, we were pleased to welcome Dr Awino Okech, Reader in Gender Studies at SOAS, University of London, to discuss her research on gender and sexual rights with Commonwealth Scholars and staff from the Association of Commonwealth Universities (ACU).

The event was hosted by Annabel Boud, Programme Manager Policy at the CSC, and jointly organised with the ACU as part of their ‘In conversation’ series of dialogues. 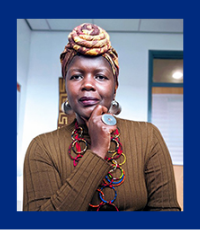 The conversation opened with a discussion of intersectionality as a framework for understanding the interacting oppressions that shape gender inequality. Citing Professor Kimberlé Crenshaw and Professor Oyèrónkẹ́ Oyěwùmí, Dr Okech outlined how the theory of intersectionality explains that women’s experiences as women cannot be essentialised because experience and identity are always informed by a complex of factors ranging from ethnicity and nationality through to socio-economic status and class. As such, Dr Okech argued that to understand gender inequality it is important to recognise the different ways that gender intersects with other aspects of inequality in the oppression of women or gender non-conforming people.

“The work that we should be doing is to excavate, to rethink the very robust and broad ways that our societies understood gender.”

Returning to the theme of intersectionality, Dr Okech also emphasised that the contemporary experience of same sex people is not uniform, but is intrinsically linked to and informed by their other identities: “How people experience the impact of harmful laws that criminalise behaviour is directly impacted by their racial, gender, and class positioning in [their] societies.”

Despite these challenges, Dr Okech stressed that there were many reasons to be hopeful about the future of gender and sexual rights. In the African region, the growing strength of social movements petitioning for legal changes and the emergence of transnational collaboration around rights causes presented optimistic signs of improvement.

Dr Okech also outlined the importance of Higher Education and scholarship, both as a way to challenge students’ received ideas but also to enable them to understand, analyse, and critique the causes of inequality. Though recognising that university collaboration plays a crucial role in this, Dr Okech warned against institutions being too inward looking and failing to engage in equitable partnerships with universities in the Global South.

During the final part of the event, participants were invited to ask questions and the focus turned to practical ways that Scholars and ACU staff could help support gender and sexual rights within their own institutions, workplaces, and wider society. Responding to questions around inclusive workplace culture, Dr Okech urged participants to “unlearn the things we normalise as jokes” and work to challenge the policies that privilege heterosexual people or discriminate against people based on their gender or sexuality. Inclusive policies benefit everyone – not just those for whom they are ostensibly intended.

On the question of ‘pink-washing’ by governments and corporations, Dr Okech highlighted the need to be alive to the way that discourses around identity evolve and can be deployed or exploited by those in authority to cover up abuses of power. Dr Okech also spoke of the need for social movements to work in tandem with, rather than on behalf of, corresponding groups in other countries.

Commonwealth Shared Scholar Jacqueline Ngong from Cameroon asked what advice Dr Okech had for working productively with groups who held opposing views in society. Dr Okech encouraged Scholars to think strategically about how to engage those in positions of power or influence, and particularly with those who can act as intermediaries across political, social, and cultural divides.

Commonwealth Scholar Gertrude Nyirenda from Malawi asked whether interventions to empower women and girls, particularly in education, could have a negative impact on hopes for gender equality. Dr Okech responded that affirmative action policies serve an important purpose in redressing structural inequalities, but that the real problem lies with the public discourse around gender equality as a “battle between the sexes”. To overcome this, Dr Okech stressed the need to champion an increase in gender rights as beneficial to both men and women, as well as society as a whole. Giving the example of masculinity, Dr Okech noted how the gains of gender equality can be seen to empower men, not least because the system of patriarchy also “creates conditions that are unhelpful to men”.

Do, unlearn, mobilise, and go forth

Following this, Annabel Boud drew the discussion to a close and gave special thanks to Dr Okech for taking time to speak and share her insights. Annabel also thanked the Scholars and ACU staff who had participated in the event and contributed questions.

Highlighting the key advice from the discussion with Dr Okech, Annabel emphasised how our shared commitment to improve gender and sexual equality could be summarised in four ways: “do, unlearn, mobilise, and go forth”.