Inspiring women in the field of pharmacy 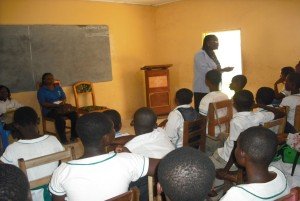 Dr Frances Owusu-Daaku (1986 Commonwealth Scholar from Ghana, PhD Pharmacy at the University of Manchester and 2000 Commonwealth Fellow at the School of Pharmacy) and Dr Rita Akosua Dickson (2003 Commonwealth Scholar from Ghana, PhD in Pharmacognocy, King’s College London) have been mentoring women in the field of pharmacy and increasing their opportunities for a career in science in the Faculty of Pharmacy and Pharmaceutical Sciences College of Health Sciences, Kwame Nkrumah University of Science and Technology, Kumasi, Ghana.

Frances was once the only female member of faculty, but after returning to the college after her award in 1992, she worked with her colleague, Rita, to improve the career chances for women at the college, and now there are five women in a staff of thirty in the faculty. Both are heads of department in the first school of Pharmacy in Ghana. Frances has served as Head in two departments, Pharmaceutical Chemistry and now Clinical and Social Pharmacy, and Rita is the Head of the Department of Pharmacognosy. Both women feel that their visibility in the discipline has also helped other women to aspire to a career in pharmacy and the sciences. Frances’ research interests include Ghanaian pharmacists and mental health provision and Rita’s is in bioactive natural products including anti-infectives, wound healing, antipediculocidal and anthelmintic agents from Ghanaian medicinal plants.

Frances and Rita have also participated in professional associations in pharmacy and in related areas that help women to improve their career chances. Frances was once Vice President of the Pharmaceutical Society of Ghana and has been elected the West Africa Regional Representative and one of two Vice Presidents of  the Commonwealth Pharmacists Association for 2011-3013. Both she and Rita served on the scientific committee that hosted the CPA conference in Ghana in 2009. Rita has been the Country Coordinator for the West African Network of Natural Products Research Scientists since 2009 and both are active members of the Lady Pharmacists Association of Ghana of which Frances was, for seven years, a Regional Coordinator.

Both are Volunteers of the Planned Parenthood Association of Ghana and Frances was for five years the President and is presently an honorary member of Council. Rita is now a branch and Zonal Chairperson of the Association. PPAG’s primary focus is Adolescent Sexual and Reproductive Health, and Rita and Frances are able to draw on their backgrounds in pharmacy and knowledge of issues surrounding SRH in their work with young people.