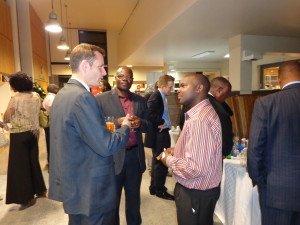 In his welcoming remarks, Mr Mutuku Nguli, Director of Programmes at the British Council, Kenya expressed delight with the way that the chapter has been growing since its inception in 2011. During the meeting, chapter officials led by Dr Maurice Okoth (2009 Commonwealth Academic Fellow, Physical Chemistry, University of Strathclyde),took members through the chapter structure and constitution.

Maurice also gave a report on the chapter’s activities over the last year, and challenged members to continue their programme of events and encourage other Kenyan alumni to participate. Other topics of discussion included chapter finances, member subscriptions, and the chapter strategic plan.

Hugh Moffat spoke of his expectation for the future role of the association in ‘giving something back’ to fellow Kenyans at both professional and social levels. Both guests expressed excitement at working more closely with the chapter in the future.

The chapter would like to thank the British Council and the British High Commission in Kenya for helping make the event a success.