‘Removing the divide: respecting and understanding cultures’ was the theme of a postgraduate conference held at Cardiff University on 20 June 2014. Organised by Cardiff University School of Social Sciences and Welsh School of Architecture, in collaboration with Commonwealth Scholarship Commission in the UK, the event featured presentations on multidisciplinary topics exploring the broad theme of culture.

One of the speakers was Cyprian Misinde, a 2011 Commonwealth Scholar from Uganda. Cyprian’s presentation was entitled ‘Understanding the concept of transgender in Uganda: a case study of ‘Nyasigweli’ concept among Jop’adhola community’. 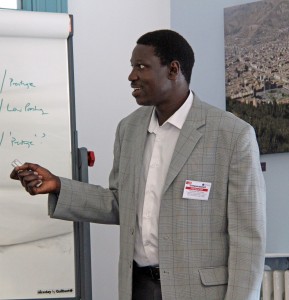 Unprecedentedly in the 21st century, debates around gay rights have led to a divide between some African countries and developed countries.

The disagreement arises from the enactment of laws banning homosexuality in some African countries such as Uganda, and the subsequent cutting of aid to such countries by developed countries. Essentially, some African leaders and theologians argue that gay rights are not in line with African values and therefore should not be allowed to dent the African culture, which treasures the ‘godly’ heterosexual marriage and family values. However, the debate does not consider sexual minorities such as the ‘Nyasigweli’ or transgender who are embedded within the communities in which they were born and raised, and contribute to the same cultures and values.

The term ‘Nyasigweli’ was first defined by a Polish Catholic priest who lived among the Jop’dhola community in 1934. It is defined as a ‘eunuch; living with the girls in their house, dressing and behaving like a woman. Not castrated’ (William 2009:148). The definition is inadequate but reflects the views of that time.

More recent conversations with three groups of people aged between 30 and 87 in Padhola, Uganda, suggest the term connotes elements of both masculinity and femininity. The concept embodies two words: ‘nya’ which refers to a girl or female; and ‘gweli’ which means ‘to try’. According to the conversation participants, Nyasigweli is ‘a man who attempts to be a woman’, ‘a person born as male, or whose parents report as male, but later – as they grow – begins to behave like a woman’. Nyasigweli behaviour spans from preferring female attire and appearances to undertaking activities that are considered feminine among the Jop’dhola, such as cooking and chatting with women.

Nyasigweli sexuality is not vividly known, but the conversation participants hinted that some Nyasigweli will date men. In most cases, the relationship will end violently if the men concerned realise they are with a Nyasigweli. Relationships with men also expose Nyasigweli to victimisation under Uganda’s anti-homosexual laws. They are seen as trying to induce other men into homosexuality, when in actual sense they are not – because of being in the wrong body. 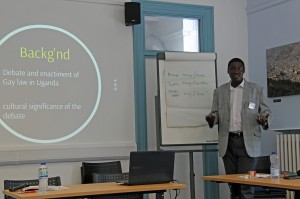 In summary, there is a large knowledge gap. Gaining an understanding of other terms used by different tribes in the context of the current debate about lesbian, gay, bisexual, and transgender rights would help to ‘remove the divide’ and promote respect for cultural values. Because the Nyasigweli are born and raised within the community and contribute to its existing values, they can therefore contribute to changes in such values. Their rights ought to be respected and they should be given equal opportunities without marginalisation. They need to be heard and treated with respect and dignity.