Unlike in previous years, the 2020 Parliamentary event took place online, with Scholars and guests joining virtually to hear about the role of a Minister in Government and gain an insight into working life in the House of Commons and House of Lords from Harriett Baldwin MP (Member of Parliament for West Worcestershire) and The Rt Hon the Lord Luce KG GCVO PC DL (former Crossbench Peer from 2000-2020).

The event was hosted by Dr Alastair Niven LVO OBE, Chair of the CSFP Support Group, who welcomed attendees and introduced the new Secretary-General of the Commonwealth Parliamentary Association (CPA), Stephen Twigg. Formerly a longstanding MP with keen interests in education, Stephen Twigg spoke of the importance of Commonwealth Scholarships for sustainable development and expressed his hope of developing closer ties with leaders and educators across the Commonwealth in his new role.

Working towards a common future 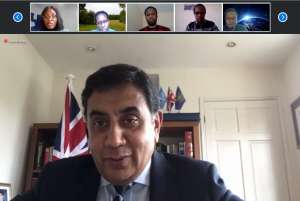 In his keynote address, Lord Ahmad paid tribute to the unique make-up of the Commonwealth: the diversity of experiences its 54 nations bring together and the collective achievements it has made throughout its history. Lord Ahmad also shared anecdotes about his personal connection to the Commonwealth and expressed how Commonwealth Scholars played an integral role in strengthening relationships and driving development both within and between Commonwealth countries.

Reflecting on the Commonwealth Heads of Government Meeting 2018 (CHOGM) in London, Lord Ahmad commended the collaboration and shared values of the Commonwealth nations which he hoped would continue building towards a better common future for all.

A wealth of experience working with the Commonwealth

Following Lord Ahmad’s address, attendees heard from Harriett Baldwin whose role as a former Minister of State for Africa and International Development provided valuable experience for Scholars to draw on. Harriett Baldwin emphasised the importance of local politics and community action within the broader framework of national politics and emphasised the strength of the Commonwealth network both within the UK and overseas. 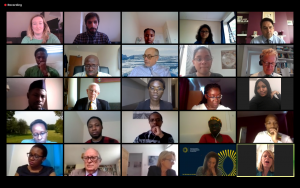 After this Lord Luce spoke about his experience as a Peer in the House of Lords, stressing the vital role the Lords plays in UK politics in scrutinising new laws put forward by the House of Commons. As a patron of the Council for Education in the Commonwealth as well as a former Foreign and Commonwealth Office Minister and Governor of Gibraltar amongst other roles, Lord Luce has a longstanding commitment to Commonwealth interests and in his talk Lord Luce highlighted the role that Commonwealth Scholars play in sustaining this international community.

Supporting higher education throughout the Commonwealth

As well as welcoming UK Parliamentarians to this event, we were also pleased to be joined by the Chair of the CSC, Richard Middleton, and Chief Executive and Secretary-General of the ACU, Dr Joanna Newman MBE FRSA. Both Richard Middleton and Joanna Newman spoke about the fundamental importance of higher education to sustainable development and prosperity across the Commonwealth and praised the expertise of Commonwealth Scholars in their various fields. 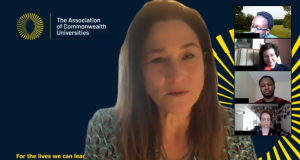 Dr Joanna Newman concluding the talks at the event

In her closing remarks, Joanna Newman expressed how technology had once again proved to be a force for good during the Covid-19 pandemic, as the success of the virtual Parliamentary event had shown, and that it was inspiring to see Scholars who would become future development leaders in a world after Covid-19 participating in the event.

A virtual visit to the Palace of Westminster

Following the talks, Scholars joined a virtual tour of the Palace of Westminster which covered the history of the building and key moments in the formation of the modern UK Parliament. Scholars were offered an insider’s view of the House of Commons and House of Lords chambers with anecdotes about the different MPs and Peers who had sat there over the years.

Special thanks go to the Commonwealth Parliamentary Association UK (CPA UK), Parliament Visitor Services, Council for Education in the Commonwealth’s (CEC) Commonwealth Scholarship and Fellowship Plan (CSFP) Support Group for all their help in organising and delivering this event.