This annual event offers Scholars an introduction to the workings of the UK Parliament and brings together an audience of Parliamentarians from across the political spectrum who are united by their shared interests in furthering education and supporting international development through the Commonwealth.

We were pleased to welcome close to 50 Commonwealth Scholars to this year’s event as well as special guests from amongst others the Foreign, Commonwealth and Development Office (FCDO) the Association of Commonwealth Universities (ACU), the British Council, and the Commonwealth Secretariat.

The event was hosted by Dr Alastair Niven LVO OBE, Chair of the CSFP Support Group, who opened the event by welcoming Scholars, who represented a broad array of Commonwealth countries, and guests. Dr Niven then introduced the first speaker, Paul Blomfield MP, Labour Member of Parliament for Sheffield Central. 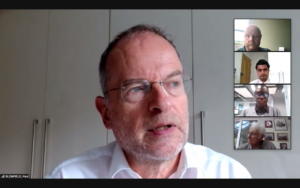 As a Member of Parliament committed to supporting the interests of universities and students, Paul Blomfield spoke passionately about of his advocacy on education matters in Parliament and his active role in the All-Party Parliamentary Groups (APPGs) for Students, International Students, and Universities. He also highlighted the importance of Commonwealth Scholars in enriching the learning experience and culture of UK universities as well as strengthening international higher education more generally. Speaking about challenges students face in higher education, and particularly the Covid-19 pandemic, Paul Blomfield outlined how the need for collaboration across political parties and between both the House of Commons and House of Lords was essential in order to effect meaningful change and provide the necessary scrutiny of existing legislation.

Finally, Paul Blomfield responded to Scholars’ questions about extending online learning provision, the relationship between the House of Commons and Lords, and what he considered were the lessons learnt from the Covid-19 pandemic.

A day in the life of a Minister

The second speaker at the event was Lord (Tariq) Ahmad of Wimbledon, Minister of State for South Asia and the Commonwealth at the Foreign, Commonwealth and Development office (FCDO). In his address, Lord Ahmad spoke of the shared history of the Commonwealth as being central to the experience of living in the UK today. Drawing on his personal connections to India and Pakistan, Lord Ahmad also talked about bringing these experiences to bear on his work as a Minister which included a diverse portfolio of responsibilities, from working with partners across the Commonwealth to responding to questions in the House of Lords. 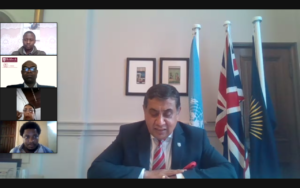 Looking back on the Commonwealth Heads of Government Meeting 2018 (CHOGM) in London, Lord Ahmad commended the shared values of the Commonwealth nations and the spirit of cooperation in tackling major challenges such as Covid-19, cyber security, and climate change. Addressing Scholars directly, Lord Ahmad concluded by praising their expertise and dynamism, and shared his hope that they would go on to become leaders in their own countries supporting a fairer, sustainable future for all.

A view from the Lords

Following Lord Ahmad’s address, attendees heard from Baroness Sugg CBE, who spoke in detail about her life as a working Peer in the House of Lords and the day-to-day responsibilities of collaborating with other members and holding the government to account through questions, debate, and legislation. Baroness Sugg also talked about her former role as Minister for Overseas Territories and Sustainable Development at the Foreign, Commonwealth and Development Office, and touched on her advocacy work in matters of gender equality and girls’ education through, for example, chairing the APPG on Population Development and Reproductive Health. 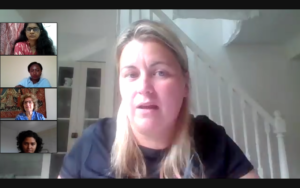 After her talk, Baroness Sugg answered a range of thought-provoking questions put to her by Scholars including what more the UK could be doing to support Covid-19 vaccine delivery across the Commonwealth; how the UK’s exit from the European Union had influenced its international development programme; and what additional steps the UK and the Commonwealth could take to tackle domestic violence and support victims of abuse.

Higher education and governance in the Commonwealth

As well as welcoming UK Parliamentarians to this event, we were also pleased to be joined by the Chair of the CSC, Richard Middleton. In his talk, Richard spoke about the wealth of experience amongst Commonwealth Scholars and the important role Scholars play in terms of development impact and contributing to equitable prosperity in their home countries. He also praised Scholars for their enthusiasm and tenacity to achieve great things and highlighted the CSC’s ongoing commitment to support Scholars both during and after their scholarship.

The penultimate speaker at the event was Stephen Twigg, Secretary-General of the Commonwealth Parliamentary Association (CPA) and former Labour Member of Parliament. Echoing others’ congratulations to Scholars, Stephen spoke of the vibrancy and dedication of Commonwealth Scholars whose keen interests in addressing contemporary challenges could be clearly felt by their insightful questions to Parliamentarians.

In his talk, Stephen discussed the role of the CPA in bringing together parliaments and parliamentarians at a national and sub-national level across the Commonwealth and promoting good governance and support for parliamentarians. Stephen also spoke about the CPA networks which play an important role in raising critical issues and the need to prioritise youth engagement because of the impact that the Covid-19 pandemic has had on young people’s education and employment prospects. Finally, Stephen gave warm thanks to Peter Williams, outgoing Secretary of the CSFP Support Group, for his tireless work in championing education in the Commonwealth over many years.

The event finished with closing remarks from Dr Joanna Newman who spoke of how encouraging it was to see the work that Scholars were doing, both during their studies and afterwards, come to fruition. Highlighting the origins of Commonwealth Scholarships and birth of the modern Commonwealth, Dr Newman also stressed the great value of cultural and educational connections that scholarship programmes provided. Lastly, Dr Newman extended thanks to all the  speakers at the event and reminded Scholars of the various ways of staying connected through the CSC’s Alumni Network.

A virtual tour of the Palace of Westminster

Following the talks, Scholars joined a virtual tour of the Palace of Westminster which covered the history of the building and key moments in the formation of the modern UK Parliament. Scholars were offered an insider’s view of the House of Commons and House of Lords chambers and a Q&A session covering the different functions of the parliament building.

Our thanks go to the Commonwealth Parliamentary Association UK (CPA UK), Parliament Visitor Services, Council for Education in the Commonwealth’s (CEC) Commonwealth Scholarship and Fellowship Plan (CSFP) Support Group for all their help in organising and delivering this event.