Prince Tommy Williams is a 2011 Commonwealth Professional Fellow from Sierra Leone. After his three-month Fellowship at LifeLine Network International, a group of grassroots community organisations and NGOs based in 16 countries around the world, Prince felt that he was able and ready to do more.

Shortly after his return from the UK, Prince was offered a promotion at LifeLine in Sierra Leone, to the role of Deputy Director. This was an upwards move for Prince, and he was confident that he could take on the challenge of being in charge of the daily operation of various projects including, among others: 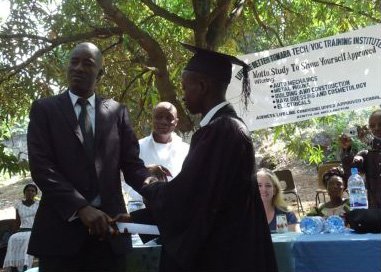 Since his return, Prince has met many government ministers to discuss service provisions that would reduce unemployment amongst young people. He is also passing on the skills he acquired in the UK to those he works with and continues to equip individuals and communities for community development and nation building.

Leonard Kamara is a 2010 Commonwealth Professional Fellow from Sierra Leone, also hosted by LifeLine Network International. Since his time in the UK, Leonard Kamara has been appointed to the Senior Management Team (SMT) of LifeLine in Sierra Leone. He also doubles up as the Finance Director and Schools Manager.

Leonard continues to seek to improve the finance systems and is building a team to transparently and accurately deal with the NGO’s finances. Leonard and the SMT are keen to adapt the methods of financial management practiced by LifeLine community projects in UK to fit their context, given the resources and expertise available.

Leonard has also taken charge of the management of LifeLine Nehemiah School, which has dramatically improved standards. The school was commended on national radio for achieving high grades. He has established a governance committee for the school, to ensure accountability and direct dialogue between parents and the school management. Furthermore, he has had several meetings with Sierra Leone’s Chief Education Officer and the Director of the Inspectorate of Schools, to discuss how to hold teachers accountable and improving teaching and learning.

Leonard has also been involved in mentoring and teaching enterprise and employment to 16 to 25 year olds on LifeLine’s technical vocational training course.

Jamie Singleton, Network Coordinator at LifeLine Network International in the UK, said ‘The Professional Fellowship scheme has given these emerging leaders the opportunity to develop and step into the next phase of leadership in service of their communities’.