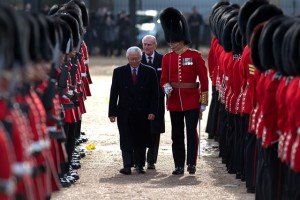 The President of the Republic of Singapore, Tony Tan Keng Yam (centre left), during his state visit to the UK in October 2014

A newly-revived Royal Commonwealth Society of Singapore will encourage new innovation-focused Commonwealth Scholarships for Singaporeans to study in the UK, announced HM The Queen last week, during a state banquet in honour of President Tony Tan Keng Yam.

The scholarships will enable more leading Singaporeans to come to the country to complete their education. Singapore already has several notable Commonwealth Scholars, including former Speaker of Parliament Abdullah Tarmugi and former Attorney-General Professor Walter Woon. More scholarships, alongside private sector sponsorship, will help to increase their number.

The UK Department for Business, Innovation and Skills (BIS) is supporting the revival of the Royal Commonwealth Society of Singapore, in recognition of the UK and Singapore’s historic ties and longstanding common support for the Commonwealth, and to foster future collaboration. Singaporeans in the Society will be involved in the advertising and selection process for the new scholarships, alongside the CSC.

‘I am extremely pleased that this important society is being revived. Britain has a long history of collaboration with Singapore and our universities are privileged to count many prominent Singaporeans amongst their alumni. These innovation-focused scholarships are a continuation of this fine pedigree and will ensure both Britain and Singapore benefit from the closer ties these will create.’

‘The Royal Commonwealth Society warmly welcomes the initiative to establish a branch devoted to Commonwealth interests in Singapore. We are also particularly pleased that the new branch will be building on the Commonwealth’s strong track record in education.’

‘The Commonwealth Scholars form a valuable network linking the top educational institutions in the UK with policymakers and opinion-shapers in Singapore and elsewhere.’