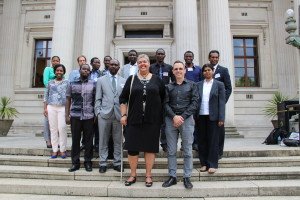 ‘Removing the Divide: Respecting and Understanding Cultures’, the postgraduate interdisciplinary conference, took place on Friday 20 June 2014 at the School of Social Sciences, Cardiff University. The conference was the culmination of a series of events promoting interdisciplinary research exchange, and was one of the first collaborations between three of the eight Commonwealth Scholars’ Regional Networks.

Organised by the Wales, Northern Ireland and South West Regional Networks in partnership with researchers from Cardiff University, the event was a resounding success. This ‘meeting of outstanding minds’ was made possible thanks to financial support provided by the University Graduate College, Cardiff University and the Commonwealth Scholarship Commission in the United Kingdom. Through this event, scholars from various universities across the UK were able to meet and discuss cultural challenges facing select Commonwealth countries.

The keynote speeches were given by Professor Iain Borden, Vice-Dean of Communication, Bartlett Faculty of the Built Environment, University College London and Professor of Architecture and Urban Culture, Bartlett School of Architecture, University College London; and Her Excellency Mrs. Aloun Ndombet-Assamba, Jamaican High Commissioner to the United Kingdom and former Minister of Tourism Entertainment and Culture, Jamaica.

Three of the Commonwealth Scholars who presented at the conference were:

Other Commonwealth Scholars who presented papers were:

Active involvement in the Regional Network is an important way for Scholars and Fellows to become connected to a wider research community. Through the organisation of student-led interdisciplinary activities such as the Removing the Divide conference, participation in regional events also enables researcher development. There are eight Regional Networks connecting Commonwealth Scholars and Fellows in the same university or region within the United Kingdom. Each has a regional coordinator who is responsible for working alongside members in seeking to plan and organise regional events that will help to ensure a high quality academic experience.

Photos of the event are available on the CSC’s Flickr page.