Representing youth in the World Conference on Youth 2014

Salman Ahmad is a 2013 Commonwealth Shared Scholar from Pakistan, currently completing a Master’s in International Business at the University of Liverpool. Salman had the opportunity to take part in the World Conference on Youth 2014, and reflects on the outcomes of the conference. 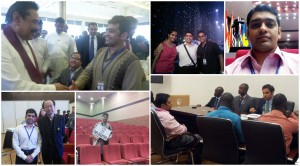 In the first week of April 2014, I received an email about my selection as an International Youth Delegate for the World Conference on Youth 2014 (WCY 2014), which would take place from 5-10 May 2014 in Colombo, Sri Lanka. The cross-cutting theme of WCY 2014 was ‘Mainstreaming youth in the post-2015 development agenda’. More than 1,500 participants attended the conference, including 350 international delegates, 26 ministers and official representatives of states, the President of the General Assembly of the United Nations, the United Nations Secretary-General’s Envoy on Youth, and the President of Sri Lanka. The aim was to produce a joint outcome document between states and youth, the ‘Colombo Declaration’, to recognize youth in the post-2015 development agenda.

During the conference, I had the chance to meet with the President of Sri Lanka, the UN Secretary-General’s Envoy on Youth, the Minister from China, and many other important delegates. I participated in roundtable discussions on youth employment and entrepreneurship to discuss how we can streamline the problem of youth unemployment into the post-2015 development agenda. The roundtable discussion was started with presentations from keynote speakers including the Minister from China, Mattie Cognac, International Labour Organization, and Dilith Jayaweera, Joint Managing Director, Triad Lanka. This session helped me to understand that the problem of unemployment does not belong to any particular country or region; instead it is one of the most important and common problems facing youth from all regions today.

We started the discussion by highlighting the factors behind the mounting problem of youth unemployment. Many participants raised concerns that there is not only unemployment of people, but there is also unemployment of resources that need to be addressed cautiously. Further issues that were bought up as restrictive to young people’s employment include poor education, corruption, poverty, immigration, and fewer opportunities for entrepreneurial careers. On the second day of discussion, we focused on how unemployment can be addressed. Career counseling to increase employability and entrepreneurial opportunities were two frequently suggested solutions to youth unemployment. The outcome of the roundtable discussions was the recommendations for ‘full employment and entrepreneurship’, which was set out in the Colombo Declaration 2014.