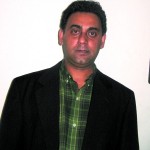 Dr Roshan Ramessur (1985 Commonwealth Scholar from Mauritius, BSc Marine Chemistry, Bangor University) has been invited to present an abstract at the International Conference and Workshop on Renewable Energy Sources and Sustainability at Universite des Mascareignes. The conference will be held in Mauritius in July 2014. Roshan is currently an Associate Professor in Environmental and Coastal Sciences at the University of Mauritius, where he has been teaching since 1988.

His interest marine research and sustainability was inspired by his Commonwealth Scholarship, and his international research work and attendance at meetings such as the United Nations Conference on Environment and Development of 1992 and Rio+10 in 2012 has deepened his commitment to protecting coastal areas and communities.

During his PhD Roshan specialised in the trace metals of aquatic and coastal sediments. He has contributed widely to books and international peer review journals, and has published over 60 articles. His specialisation focuses on trace metals in the aquatic and coastal sediments in Mauritius, Roshan has drawn on this research, presenting work at conferences and workshops, and participating in projects in Africa, Asia, Australia, Europe, North and South America.

Roshan spent several years coordinating a joint assignment between the International Atomic Energy Agency (IAEA) and UNESCO. The Expedition Project on Submarine Groundwater Discharge in Coastal Zones in Mauritius was published in 2006. During this time Roshan began concentrating on Integrated Coastal Zone Management (ICZM). He identified the need for ICZM was growing stronger due to limited resources and unbalanced management of coastal areas. In 2005 Roshan was appointed a member of the National ICZM Committee, a role he continues to hold.

At the 2008 Regional Programme for the Sustainable Management of the Coastal Zone of the Countries of the Indian Ocean, Roshan was lead trainer of the ICZM capacity building workshop. The workshop helped nations in the South Western Indian Ocean area manage their coastal and estuarine resources by adapting modern and sustainable methods.

Having held a number of senior positions both within the University of Mauritius as well as on projects and journals, Roshan has been able to pass his expertise to new generations of students. He has served as the Head of the Chemistry Department and as a senate member of the University of Mauritius. In 2005 he became a board member, and later a Chair of the Mauritius Oceanography Institute, directing scientist recruitment for oceanography research. Roshan also has a place on the editorial boards of the Journal of Coastal Development and the Journal of Geography and National Disasters.

Together with the forthcoming International Conference and Workshop on Renewable Energy Sources and Sustainability in Mauritius, Roshan is involved with several sustainable development projects associated with the United Nations Department of Economic and Social Affairs that will be showcased at the Small Island Developing States conference, hosted by Samoa in September 2014.