Mustak, who is studying for a DPhil in Molecular Mechanism of Cancer at the University of Oxford, shared his thoughts on the conference and the experience he gained.

The 2012 INTO CSCLeaders for Students conference is the latest in a long line of conferences that started in 1956 as HRH Duke of Edinburgh’s Commonwealth Study Conferences. 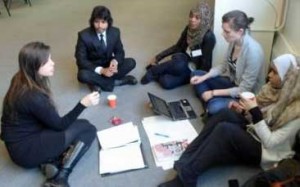 Mustak Ibn Ayub (second from left) in a group discussion

The aim of the conference is to develop leadership and the ability to tackle global challenges, and to build a Commonwealth network among the participants.The objectives of the event were to:

Speakers from different area of expertise and authority came to the conference to share their experiences with the students. Among them were the Executive Secretary of the Commonwealth Scholarship Commission in the UK, the Director of the Oxford Martin School, and the Chief Executive of Oxford City Council.

The four days of the conference addressed the following challenge: ‘How do people from communities which have spread across the world become the bridge-makers in the global networks of the future?’

I took part actively in group activities, and also gave a one-minute speech which simulated the style of Speakers’ Corner’s speeches.

INTO CSCLeaders for Students is a series of student conferences in Commonwealth cities across the world. CSCLeaders is not affiliated with the Commonwealth Scholarship Commission in the UK (CSC).