Commonwealth Scholars were involved in three major events held last week to mark Commonwealth Day on 14 March. The theme for this year was ‘An inclusive Commonwealth’.

Scholars studying in the field of education attended the Annual Commonwealth Day Westminster Seminar on the morning of 14 March, hosted by the Council for Education in the Commonwealth (CEC) at the Palace of Westminster. The seminar, attended by nearly 200 people in total, was on the theme ‘Achieving an inclusive Commonwealth – what role for education?’, and delegates heard from, amongst other speakers, Baroness Scotland, Commonwealth Secretary-General Designate. In her keynote speech, she spoke about how the diverse nations of the Commonwealth should approach collaboration for educational development, and affirmed her commitment to empowering women and girls through education for the common good as a focus of her tenure as Secretary-General. 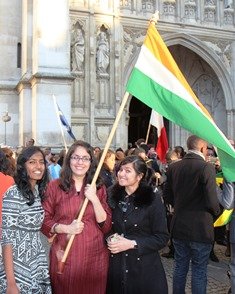 The Commonwealth Service at Westminster Abbey is traditionally the highlight of the day, and 20 Scholars attended the multi-faith service – which was broadcast live for the first time by the BBC – and heard Kofi Annan, former Secretary-General of the United Nations, deliver the Principal Reflection, as well as performances from Ellie Goulding and Simphiwe Simon Shibambu. Six Scholars had the honour of carrying their countries’ flags as part of the official procession into the Abbey, presenting the flags to HM The Queen and HRH The Duke of Edinburgh.