Maximising the impact: science and technology for society 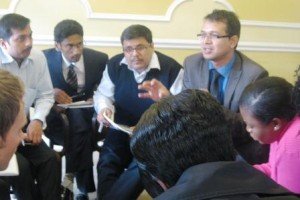 In celebration of Commonwealth Day, around 70 Commonwealth Scholars and Fellows gathered at Cumberland Lodge from 12-14 March 2010 to address the topic of ‘Science and Technology for Society’.

Focusing on the key role that science must play in the future of our societies, delegates unpacked the theme to consider the role of the Commonwealth in development, the relationship between scientists and government, and the impact of policymaking on both an economic and social level.

Academician Dato’ Ir Lee Yee Cheong, the Chairman of the Governing Council for UNESCO International Science, Technology and Innovation Centre for South-South Cooperation (ISTIC), provided the keynote speech, emphasising that we must simultaneously address the challenges of combating climate change and global poverty in order to achieve sustainability on earth.

Professor José Furtado, former Secretary of the Commonwealth Science Council, elaborated on these issues and looked at the role of S&T cooperation, highlighting the need for non-frontier, needs-based networks that build capacity and develop leadership.

The major issue that emerged was that of science policy and how best to facilitate communications between scientists and government policymakers. Both Dr Kirsty Newman of INASP and David Dickson from SciDev.Net focused on the role of intermediaries such as journalists and facilitators in translating research and its implications into political language. Professor Jeff Waage and Dr Andrée Carter demonstrated through an energetic and interactive session the competing agendas politicians face from advisers and lobbyists, and discussed how the quality of information available to them could be improved.

The conference ended with two panel sessions. The first, chaired by Dr Thao Nguyen from the ICT4D Collective at Royal Holloway, University of London, looked at the role ICT can play in youth agendas and the power of innovation to address vital development challenges.

The final session, with presentations from Commonwealth Scholars Genora Joseph, Collen Zalengera and Peta Freestone, looked at ethical and societal questions, respectively the role of the public in setting research priorities, the empowerment of youth through grassroots S&T, and the public relations crisis facing TB vaccination research.

In closing, Commonwealth Scholarship Commissioner and Director of the Commonwealth Foundation Dr Mark Collins summarised the conclusions and questions that had arisen over the weekend. He emphasised the importance of networks in maximising the impact of science and technology research, and implored award holders to join the CSC Science and Technology network in order to strengthen cross-regional and interdisciplinary ties. If anything, the importance of building relationships and improving communications between scientists, politicians and the public was the central message that delegates took away.