The CSC Connect and Collaborate Event for Commonwealth Scholars

On Friday 25 February the CSC hosted the Connect and Collaborate Event for Commonwealth Scholars studying in the UK at the Queen Elizabeth II Centre in London.

The Connect and Collaborate Event, which this year was held in place of the annual in-person Welcome Event, is the largest event in the CSC calendar, and is an important opportunity for Commonwealth Scholars studying in the UK to come together for a day of talks, discussions, and networking.

This year’s event had a special significance for those involved because it was the first time since November 2019 that Commonwealth Scholars had been able to come together en masse.

Celebrating the diversity of Commonwealth Scholarships

The CSC was pleased to welcome over 400 PhD and Master’s Scholars to the Connect and Collaborate Event in London, all of whom began their scholarship programmes during the Covid-19 pandemic.

The event showcased the academic diversity of Commonwealth Scholarships, with Scholars coming from 34 universities across the UK and studying a variety of disciplines: from agriculture and forestry to medicine, social sciences, and technology.

The range of academic interests brought together at the event was matched by the cultural diversity of Scholars who were in attendance. With around 28 countries represented on the day, the event was an important opportunity for Scholars to network with peers from across the Commonwealth.

The event supported the CSC’s key themes of Climate Action and Girls’ Education.

A warm welcome to Scholars 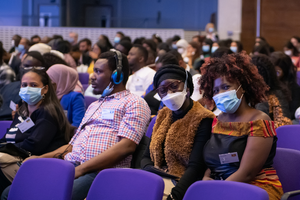 In his opening talk, Professor Robin Mason praised the success of Commonwealth Scholars whose achievements were testament to their hard work and commitment to making a difference in the world. Reflecting on his own background, Professor Mason described the significant impact that scholarships had had on his educational opportunities whilst growing up and in forging his career as an academic.

“I am absolutely passionate about the transformative effect of education on individuals, on societies, on countries, and the importance of scholarships in giving gifted individuals, like those in this room, the chance to thrive.”

As Chair, Professor Mason highlighted that his aim was to see the CSC continue to grow its support for outstanding individuals and promote the good work that the organisation does in numerous areas. These include supporting Commonwealth Scholars and Alumni to realise their development impact goals and contribute to the betterment of the Commonwealth, as well as increasing the mutual benefits for international students and UK higher education.

Professor Mason concluded by encouraging Scholars to meet as many people as possible during the day and take every opportunity to learn from the wealth of expertise within the Commonwealth Scholar community. Following his address, Professor Mason introduced the former Chair of the CSC, Richard Middleton OBE, who took to the stage to deliver his welcome remarks.

Richard gave a warm welcome to Scholars and commended their resilience in adapting to life and studies in the UK despite the challenges of the past year. Looking back on his time as a CSC Commissioner and Chair, Richard highlighted several CSC initiatives undertaken during his tenure to widen access and opportunity, including programmes to support disabled Scholars in 2019 and girls’ education in 2021.

Joining the event by video conference from Islamabad, Durreshawar congratulated Scholars and expressed her hope that the Connect and Collaborate Event would stand them in good stead when they went on to take up leadership roles in their home countries. 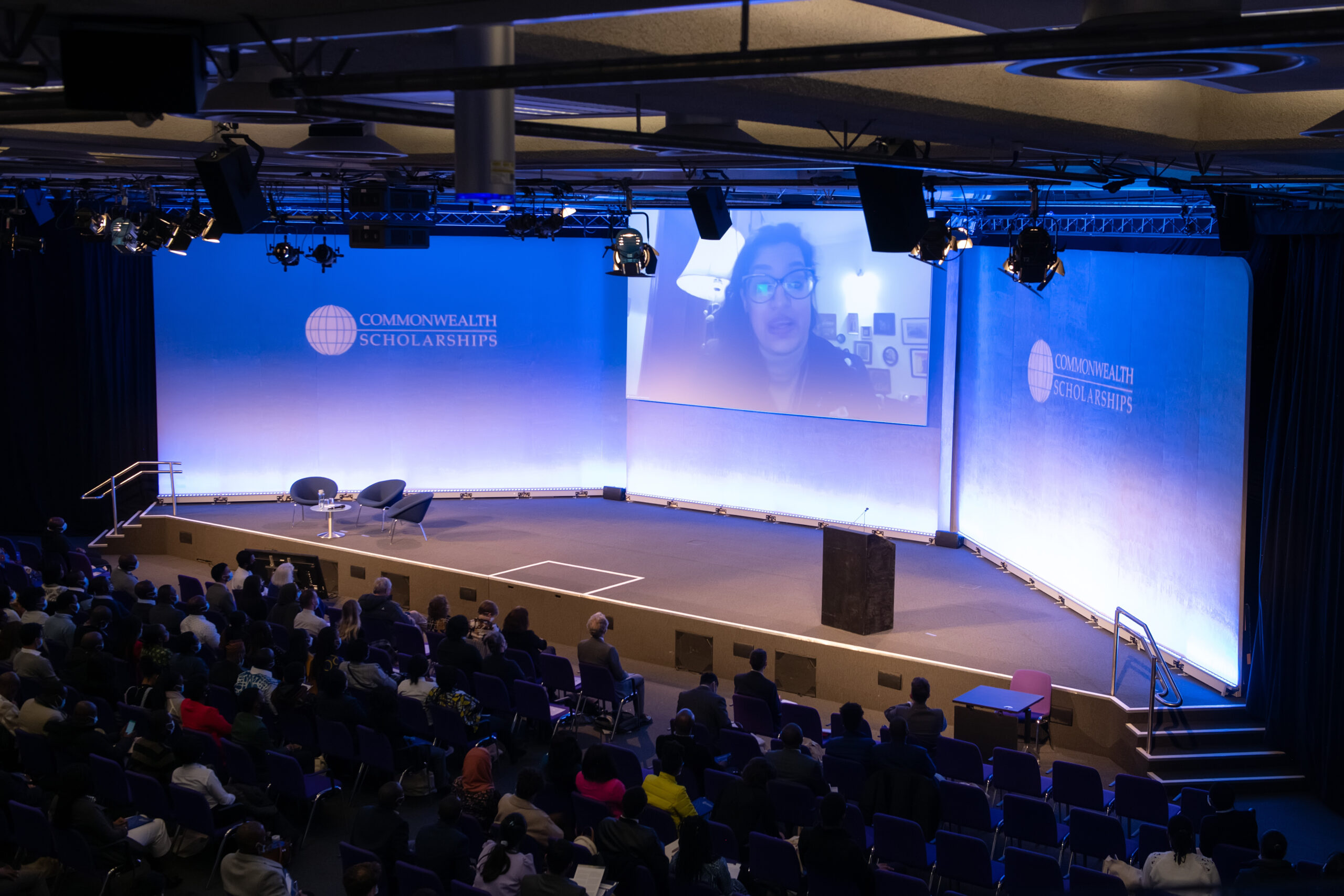 Durreshawar Mahmood delivering the morning keynote address at the event

Durreshawar opened by describing the challenges she faced when returning to Pakistan after her scholarship, especially in finding employment and witnessing the social disempowerment in her community. As Durreshawar explained, however, she found inspiration and resolve in her big idea of creating social change through climate action and women’s empowerment. This became the guiding light in her work, whether formal or voluntary, and she urged Scholars to keep hold of their purpose during and after their own scholarships.

“You carry that passion, that big idea which will be actualised…through this whole Commonwealth experience.”

Durreshawar highlighted how her scholarship had been instrumental in consolidating her own big idea and supporting her journey to becoming an activist and campaigner on social issues in Pakistan.

Durreshawar went on to discuss some of the projects she had initiated to support women’s empowerment starting with ‘Women Can Do’, an entrepreneurship campaign across 16 districts in Pakistan which provided skills training for women in business development and planning. Observing other barriers to women’s participation in employment after this initial campaign, Durreshawar set up the ‘Wireless Women Empowerment and Entrepreneurship’ programme in 2017 to support digital skills training for women in areas of the country less well serviced by the digital infrastructure.

Returning to environmental matters in 2018, Durreshawar established the ‘Women in Renewable Energy’ campaign to support women’s role in the green economy and provide a platform for advocacy and engagement with policymakers around investment in the renewable sector. Since then, Durreshawar has been involved in various programmes to support environmental sustainability and gender equity, working with rural communities, private sector organisations, and universities amongst others to improve conditions for marginalised groups in Pakistan.

Finally, Durreshawar emphasised the importance of climate action as a shared, global concern and outlined how Scholars could support initiatives such as the circular economy and renewable energy transition through advocacy and grassroots activism in their home countries.

Exploring the development challenges of today

Chaired by CSC Commissioners and staff, the discussion panels brought together guest speakers from academia and the development sector to address a series of probing questions related to trust in science and technology, public health and climate change, the global justice gap, gender norms and health outcomes, education and climate resilience, and economic development and climate change.

The sessions elicited lively debate amongst speakers and audiences, and Scholars were invited to put their questions and comments to the panel. Following the discussion panels, Scholars had the chance to discuss their own studies and research with the panel speakers during the lunch break. 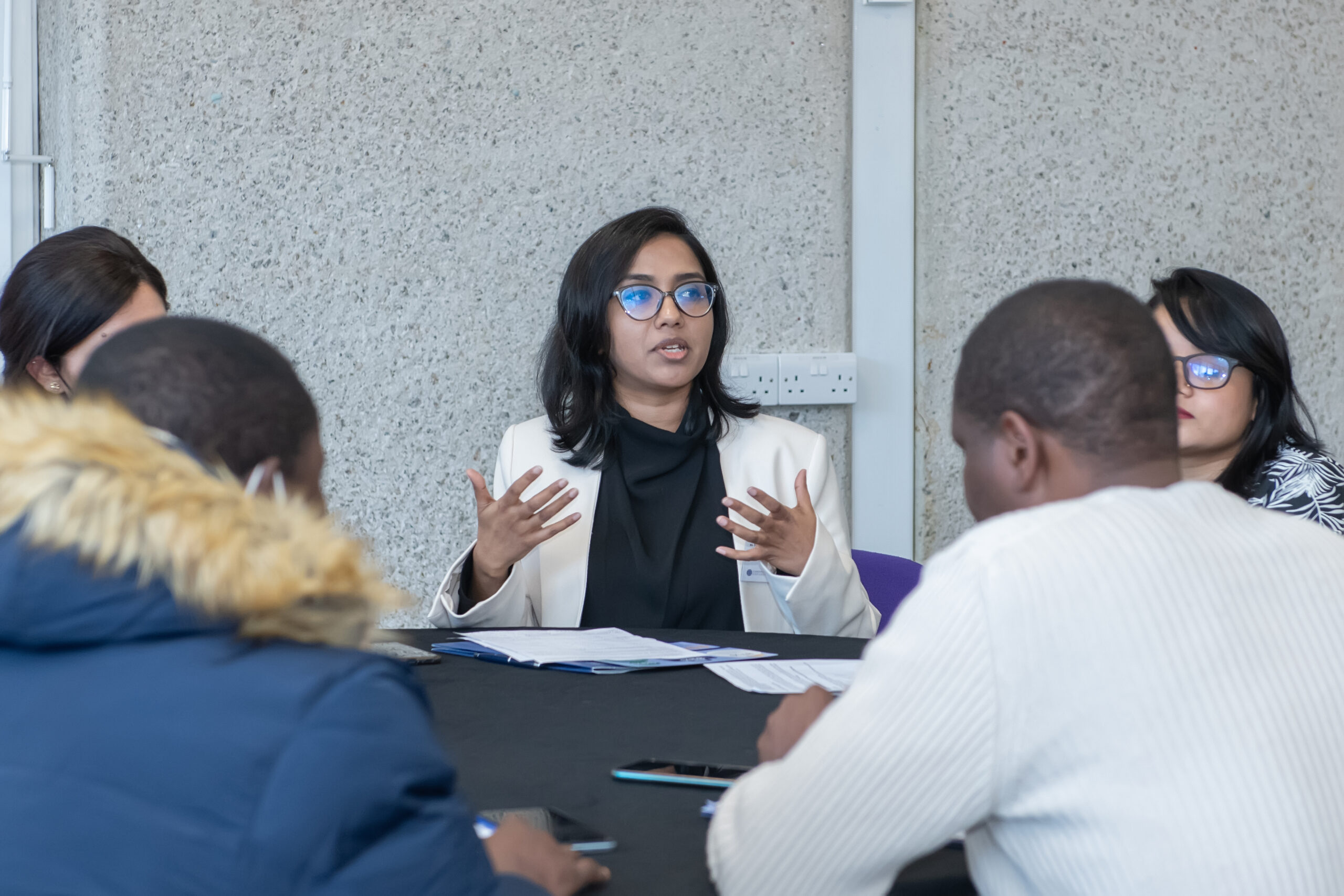 Commonwealth Scholars engaging in the Networking for Impact workshop

In the afternoon session, Scholars participated in a workshop on Networking for Impact led by trainers from AccessEd, INASP, and the CSC. During the session, Scholars were encouraged to make new connections and practise their communication skills in a speed networking exercise as well as consider strategies for strengthening their existing networks whilst in the UK as part of a network mapping exercise.

By establishing connections with people outside of their home country and area of study, Scholars gained a broad perspective of the range of skills and experience within the Commonwealth Scholarship community which they could subsequently draw on for assistance.

“The Networking for Impact workshop helped me to discuss with some Scholars and gather some ideas of how they make impact in their respective home countries. By sharing our networks, I designed a map using our backgrounds, networks, and different strengths relating to girls’ and women’s education. I am really excited to collaborate with my fellow Scholars in the future in order to realise some of these wonderful ideas.” – Commonwealth Shared Scholar from Cameroon

A call to action for leadership and international collaboration

The afternoon speeches began with a recorded address by Minister Vicky Ford, Minister for Africa, Latin America and the Caribbean at the Foreign, Commonwealth and Development Office. 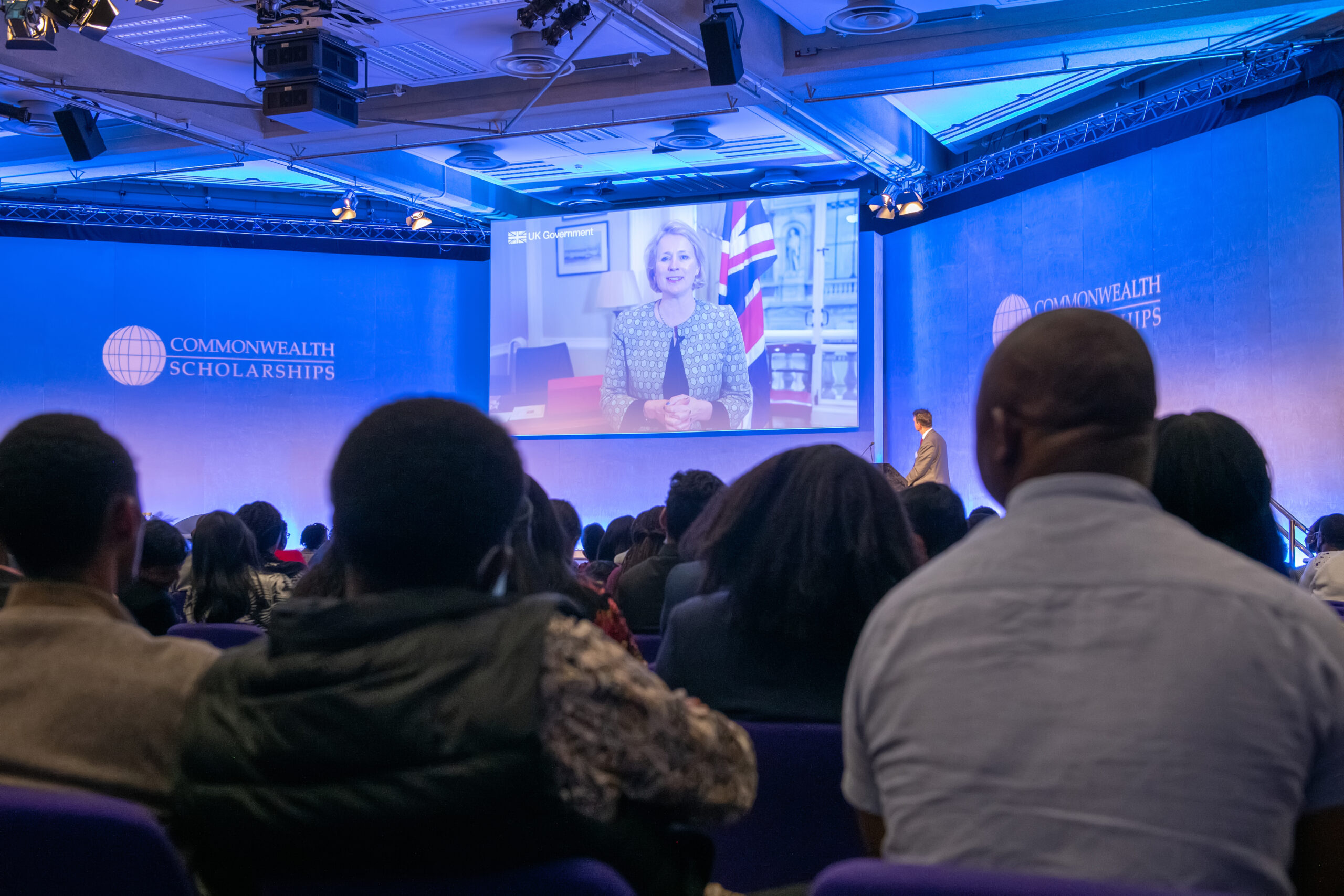 Minister Vicky Ford during her pre-recorded address to Scholars 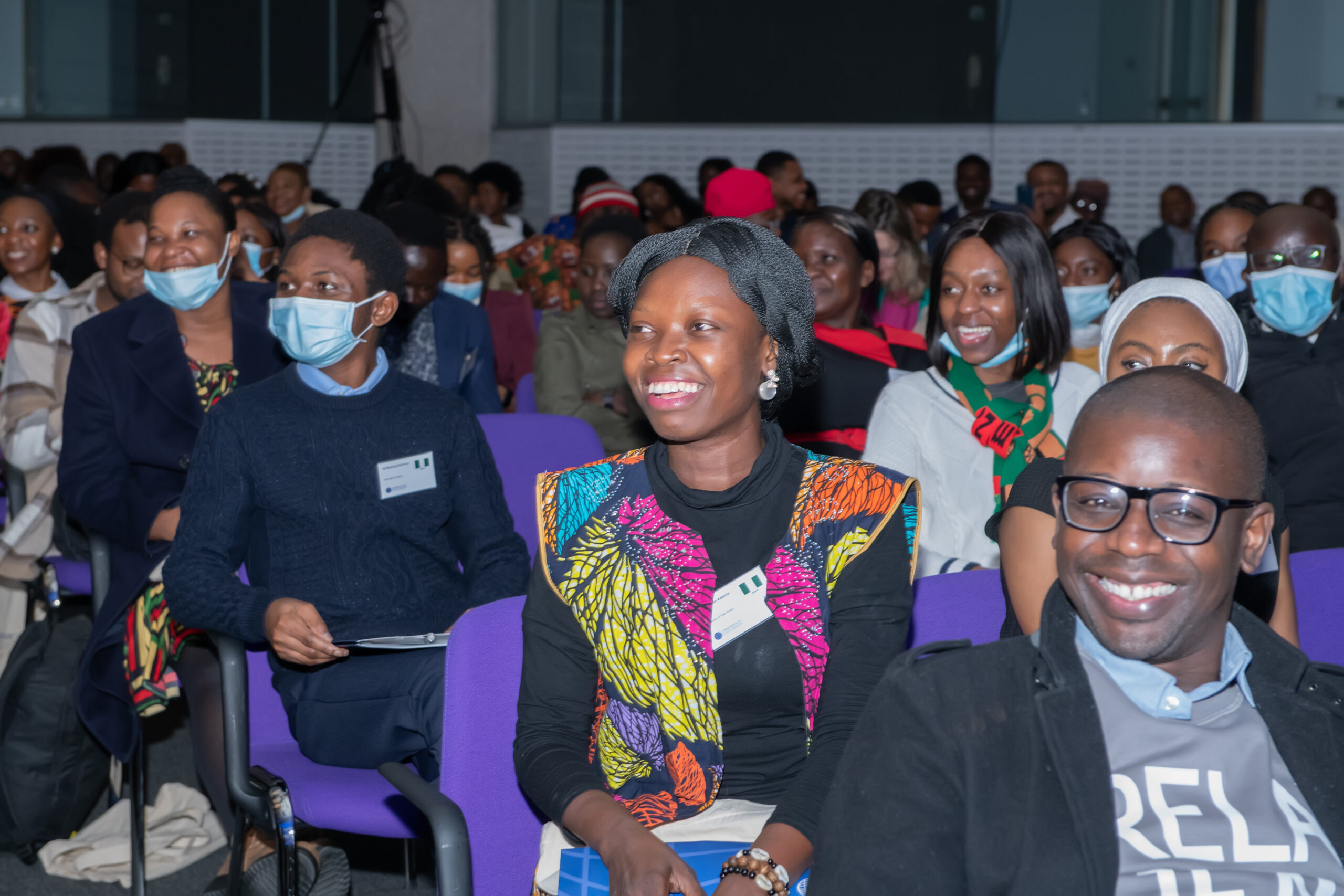 Following Minister Ford’s address, Professor Mason introduced the ACU’s Director of Membership, Programmes and Development, Barbara Kasumu, to deliver an address on the power in international networks in higher education. In her rousing speech, Barbara discussed why scholarships and the international connections of the Commonwealth are fundamental to building a better world. Reflecting on her experience of supporting women entrepreneurs in Bangladesh and meeting education ministers in South Africa, Barbara noted how the opportunity to collaborate with a diverse range of partners was central to delivering the innovative solutions and research that today’s development challenges demanded.

Barbara encouraged Scholars to build on their shared experience at the Connect and Collaborate Event by staying connected through the Scholar and Alumni networks and by working together to achieve the development impact in their communities and countries.

Passing the baton: how Scholars can lead the change in girls’ education

The afternoon keynote address was delivered by Helen Grant MP, the Prime Minister’s Special Envoy for Girls’ Education and Member of Parliament for Maidstone and The Weald. 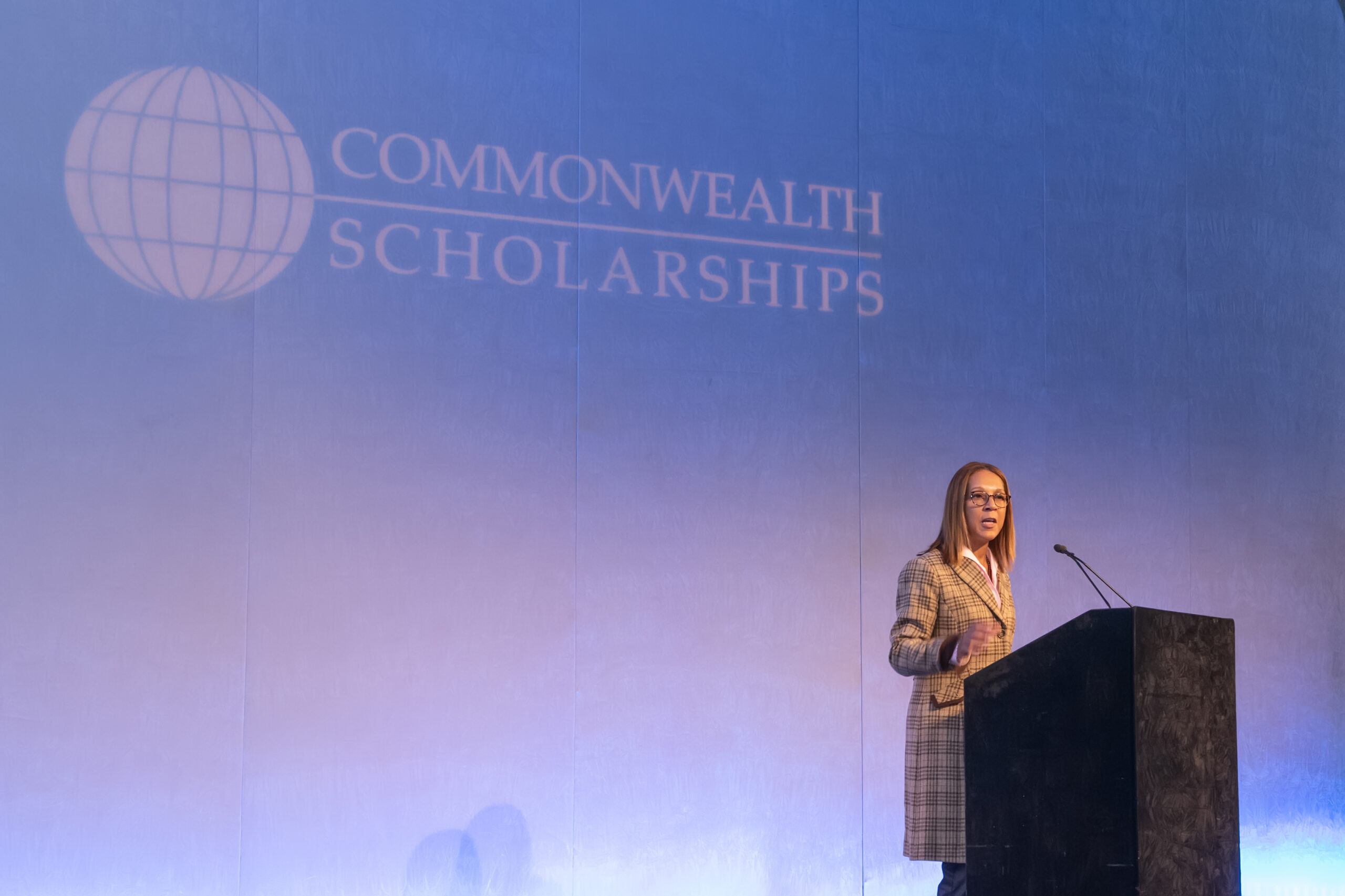 Helen opened by sharing her personal connection to the Commonwealth and expressed her gratitude at being able to speak to Scholars in person at the Connect and Collaborate Event.

As Special Envoy for Girls’ Education, Helen explained her role in championing the message of 12 years quality education for all girls across the globe. The impact of this provision, Helen explained, would be momentous in addressing gender inequalities as well as major development challenges across the world.

Helen went on to outline the UK Government priorities for girls’ education with ambitious global targets set at the G7 Leaders’ Summit to get 20 million more girls reading by the age of 10 and 40 million more girls in primary and secondary education in low and middle-income countries by 2026. In the wake of the Covid-19 pandemic and the resulting disruption to education provision, Helen emphasised that addressing girls’ education was a matter of urgency which would bring benefits for the whole of society including in areas such as climate change.

“At COP26 in Glasgow…we were able to make the important connection between girls’ education and climate change, showing how girls’ education can be part of the solution because girls who are educated are much more able to participate in decisions, in actions, and leadership in relation to climate resilience, adaptation, and mitigation.”

Helen commended the CSC’s Time Limited Programme for Girls’ Education and the 29 Professional Fellows working to remove barriers to primary and secondary education for girls across the Commonwealth who would be taking up places with UK host organisations in 2022. Helen also gave special mention to the CSC’s 2022 Alumni Community Engagement Fund (ACEF) projects focusing on girls and STEM.

In closing, Helen urged Scholars not to forget the role they could play in delivering the change for girls which would transform their lives and improve societies at large.

“I know the challenge with girls’ education is significant…but our ability to make change in the world, if we work together, is quite incredible and should never, ever be underestimated.”

Final words of thanks

The event concluded with words of thanks from Professor Robin Mason to the all the speakers and guests who had contributed to the event, and to Scholars for their continuing hard work and commitment to improving the lives of others.

Want to see photos of the event? Visit the CSC Flickr channel to relive the great moments from the day.

Want to catch up on the day’s talks? You can watch all the talks from the event on the CSC YouTube channel.