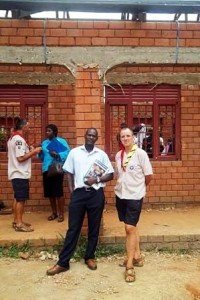 Hamis Mugendawala with Scout Leader Mike Harley, outside the classroom block under construction

I will never doubt the time-long adage that knowledge is power and wealth. From the time I became a Commonwealth Scholar at the Institute of Education, I have come to appreciate the need to use this education to alleviate society’s problems.

After being introduced to educational planning, I wrote a project to set up a community polytechnic in a rural place in eastern Uganda – a place suffering from unprecedented poverty and low levels of school completion.

According to a 2008 Save the Children report, this area has the highest incidence of child labour in the whole of Uganda. This is reinforced by the large numbers of young people who leave school to join their parents in providing labour for sugar plantations.

Although the project required a large amount of funding, with determination and empowerment from my course, I started promoting the proposal and came into contact with the Bournemouth Scouts Brigade in the UK, who became interested in supporting the project. I was invited to give a presentation to them in Bournemouth, and little did I know that this was the beginning of success for Jinja Vocational Centre.

A fundraising drive was launched and we managed to acquire a hydraform machine, which makes interlocking bricks that do not require burning, from South Africa. This reinforced our commitment to saving the environment.

In July, I sought permission from the Institute of Education to fly back to Uganda with 30 Scouts from Bournemouth to kick start the project, which we did together with the local community. By the time I returned to London (two weeks later), a block of one classroom and an administrator’s office had been constructed.

I am now on a task to seek public-private partnership funding with the Ugandan government to ensure the perpetuity of this project. Currently, the government is implementing the vocationalisation of education, where each sub-county will be expected to have a vocational institute to equip citizens with life skills to combat the country’s high unemployment levels.

This project has invigorated me to continue thinking of more ways to improve people’s quality of life, especially the poor. I am now working on a project to construct a secondary school in my home village, where I am possibly the only graduate.

In this area, the only secondary school is miles away, yet there is no public transport. As such, most children opt out of school after the primary level, rather than suffer to walk such a distance. Moreover, not many can afford bicycles to ease their way to school. No wonder that the area has drawn attention because of its high teenage pregnancy rate.

Education can help improve people and their wider community. I am grateful to the Commonwealth Scholarship Commission, without whose support I would not have had a chance to further my education.