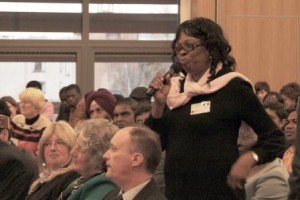 New Commonwealth Scholars and Fellows were welcomed to the UK during a Welcome Programme graciously hosted by the University of Edinburgh from 14-15 November 2010.

The continued support of the Scottish Government for the CSC allowed the event to be held outside London for the first time. An array of lectures and discussion sessions were arranged, enabling award holders to meet their award administrators as well as network with their peers.

The programme began with well-received speeches detailing the policies, procedures and visions of the CSC, including the hope that all award holders will continue to see themselves as ‘Commonwealth Scholars for life’.

This was followed by the launch of Universities UK’s new policy briefing on universities and development, and a panel discussion on its implications for future policy.

The second day featured a talk on British politics and the 2010 General Election, given by Professor Justin Fisher, Director of the Magna Carta Institute at Brunel University, and the launch of the new CSC online Directory.

The University of Edinburgh also hosted a reception at the Playfair Library on the first evening. A traditional Scottish welcome was provided, as guests entered the venue to the unique sounds of the bagpipes being played from the Library steps.

Scottish Minister for Culture and External Affairs, Fiona Hyslop MSP, addressed the reception, speaking about the importance of higher education and, in particular, the benefits which countries such as Scotland can reap by bringing scholars of high intellect to study, research and help grow their economies. Other speakers included Professor Sir Timothy O’Shea, Principal and Vice-Chancellor of the University of Edinburgh, and David Hallam, Deputy Director of the UN and Commonwealth Department at the Department for International Development (DFID).

Photos from the Welcome Programme are up on Flickr