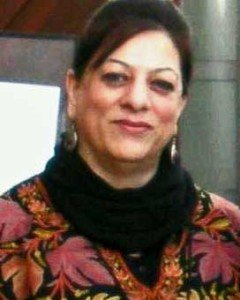 ‘Nobody can silence me – I have every right to speak.’

These were the words shouted by a 40-year-old woman at security staff and state officials, as she managed to intrude into the venue where Rahul Gandhi, Vice President of the Indian National Congress, was present. She left everyone astounded as to how she had managed to defy all security arrangements and interrupt the event, which was the launch of a women’s empowerment project in Budgam, a district of the state of Jammu and Kashmir.

The woman was extremely defiant and resisted all attempts by security to move her to the rear of the pavilion. She shouted ‘I want to tell Mr Gandhi that the Christians are attempting to convert us; that the Army is killing and abusing us; that my leaders are none other than Abu Jundal Sahab and Mast Gul Sahab; that the Army broke Abu Jundal Sahab’s jaws when he was captured in Charar-e-Sharief’.

This episode may come as a surprise to many for various reasons. Maybe it may prompt some to think: how can a woman talk so brazenly in public like this? How can a Kashmiri woman have such thoughts? Are women thinking like this in Kashmir?

While narrating this incident as the tip of an iceberg, this piece is being written as an attempt to draw attention to the question: do we know what the women in Kashmir are thinking and feeling about the whole process of peace, conflict and security, even after having survived 23 years of armed conflict?

Women constitute 50% of the population – a 50% which has a different perception, understanding, insight, and experience of the conflict. Have we ever asked them what they want?

None of us can deny the fact that women in Jammu and Kashmir have shown a lot of resilience, while experiencing physical abuse, social exploitation, political violence, and uncertainty in their daily lives. They have generally become scapegoats for political gains and have borne all this in silence.

The last 23 years of unrest have witnessed women in Kashmir both as ‘victims’ and as ‘survivors’. They have become widows and half widows. They have been raped, molested, abducted, and murdered. They have had to shoulder the heavy burden of nurturing the family in the absence of breadwinners, but unfortunately we have hardly recorded or acknowledged their sacrifices and roles.

The role of women in Kashmir is generally seen as the ‘chorus’ at peace rallies. Their sacrifices remain unacknowledged and invisible. We do not find women on the dais nor do they determine the agenda anywhere.

We hardly find a female voice in peace talks or negotiations. You may recall that the working committee set up by the Prime Minister of India some time back had all male members – except for Mehbooba Mufti, President of the Jammu and Kashmir People’s Democratic Party, who happened to be there not because of her gender, but because of her political background. I think this in itself says something about the space that is available to women in Kashmir.

All the international laws recognise the importance of women’s roles in conflict prevention, resolution, maintenance, and promotion of peace and security (as women are natural peacemakers who bring unique skills to resolving conflicts) but, despite all this, we find women completely missing from the scene in Kashmir.

The result being that women have started seeing themselves as ‘non-political’ and think of these issues as ‘men’s issues’. Maybe to some extent this could also be attributed to the cultural experience, especially that of being disempowered. But, whatever the reason, the fact remains: women’s voices are missing.

While writing this piece, I am reminded of an eyewitness account of an incident that happened some years back, during very harsh winter months in Kashmir, when the temperatures were below zero. A group of women, both young and old, stood in the middle of the road, blocking all vehicular traffic. They had arranged all kinds of barriers so that smooth movement on the narrow lane was disrupted. All requests by approaching vehicles and the drivers to give them way fell on deaf ears. The women seemed in an aggressive mood and weren’t ready to listen to any pleadings. Some policemen appeared on the scene and tried their best to convince the elderly members of the dharna (peaceful demonstration) to make way for the smooth running of the traffic.

Suddenly an elderly lady appeared out of the group. While stiffening her body and pulling in as much air as possible in her frail lungs, she shouted the often repeated cry – the slogan – ‘Hum kya chahte hein?‘ (What do we all want?)

Everyone in Kashmir, having survived a conflict of 23 years, knows the response.

But, to the surprise of many, the women around joined in chorus and replied ‘TRANSFORMER!’

For a few minutes everyone around appeared stunned. Then a young boy appeared from the side and asked ‘Have you forgotten what the response to this slogan is?’

A very daring woman came forward and replied ‘No, this is what WE want’. He asked her ‘Don’t you want azadi (revolution, liberation and freedom)?’ Another came forward and replied “Azadi can wait, but I can’t. I need electricity. I have so many chores to attend to at home. Do you expect me to use freezing cold water to wash my dishes? My children have to study; do you expect them to do so in candle light? We have been plunged in this darkness for the last more-than-one week and no one cares – so we have organised this dharna to be heard’.

The police officer tried his best to convince the women and promised to get the transformer arranged by the evening.

I don’t know whether he kept his promise or not, but such incidents act as eye-openers.

So the next time you hear someone shout ‘Hum kya chahte hein?’, be prepared – maybe the answers will be very different.