In February, Commonwealth Scholars from London and the South East region came together for a special event to enhance academic networking and highlight the impact that research students can make after their studies. The event was jointly organised by the Regional Network Coordinators for London and the South East, Amisha Pathak and Chidinma Igwenagu.

The event opened with a keynote talk by Professor Victor Oladokun, 2015 Commonwealth Fellow and Professor of Industrial and Production Engineering at the University of Ibadan, Nigeria.

Professor Oladokun spoke about ways to stay engaged as a doctoral student, encouraging Scholars to devote their best efforts to their PhD research as well as using the opportunity to enhance multidisciplinary skills. Professor Oladokun also advised Scholars to make the most of the academic research environment, both within their own universities and across other institutions and disciplines. By attending conferences, seminars, and building up relationships, Professor Oladokun expressed confidence that Scholars would greatly enhance their research capabilities and garner opportunities to collaborate on and publish papers.

Finally, Professor Oladokun urged Scholars to be confident in themselves and their academic abilities. The path to completing a PhD could be daunting, but Professor Oladokun noted that Scholars should keep in mind the importance of their PhD research to wider society and remember the vital impacts that they will make to their communities in different ways.

Building up a profile 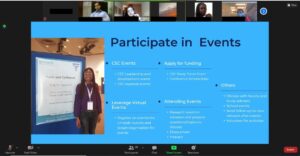 The second keynote talk was delivered by Scholastica Chinelo Olanrewaju, 2017 Commonwealth Scholar and Senior Programme Officer at the Institute of Virology, Nigeria.

Scholastica emphasised the importance of creating a digital presence, using platforms such as LinkedIn and Research Gate to forge professional and academic connections and promote the impact of research work. Networking can be harder to sustain across borders and different time zones, so Scholastica encouraged Scholars to be savvy about maintaining their professional relationships and utilise the Commonwealth Scholar associations and university contacts. Scholastica also recommended some useful professional tools to enable Scholars to stand out, including a 30-second summary to explain what they do and how they can make an impact. 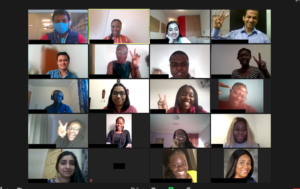 Scholars and Alumni enjoying the event

This event was an inspiring reminder to many Scholars about the value of their research work and their goal to make an impact in their home countries after their scholarship.

Thanks to our Alumni speakers and current Scholars for contributing to the success of this networking event.